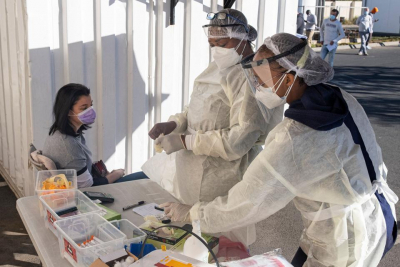 The National Institute for Communicable Diseases (NICD),reports 5,668 new COVID-19 cases that have been identified in South Africa, which brings the total number of laboratory-confirmed cases to 3, 534,131.

This increase represents a 14% positivity rate.

NICD said a further 119 COVID-19 related deaths have been reported, bringing total fatalities to 92,649 to date.

Meanwhile the opposition Democratic Alliance has called on the government to allow the national state of disaster to lapse on Saturday (15 January) instead of renewing it for a further month.

DA leader John Steenhuisen said the regulations are no longer necessary for managing the virus but cause undue harm by undermining the country’s social, economic and democratic recovery.

"People need to know they can invest in businesses large or small without the rules of the game suddenly changing. Without investment, there will be no job creation and no sustainable poverty alleviation," he said.

Steenhuisen also called the National Coronavirus Command Council 'profoundly undemocratic' in that it allowed a small group of individuals taking decisions on all our behalf without parliamentary oversight and other democratic checks on power.

While the national state of disaster was initially set to lapse on 15 June 2020, the legislation provides that it can be extended by the Cooperative Governance and Traditional Affairs minister by notice in the gazette for one month at a time before it lapses.

However, Cooperative Governance and Traditional Affairs minister Nkosazana Dlamini-Zuma has confirmed that the government is in the process of developing sustainable regulatory measures needed for the control of Covid-19 beyond the national state of disaster in terms of existing legislation.

In a December parliamentary Q&A, Dlamini-Zuma said that while the government cannot give a specific date on which it will end South Africa’s state of disaster, it was receiving active attention.

"It is important to reiterate that all lockdown restrictions will be lifted and the state of disaster will be terminated as soon as it is determined that the need to augment existing legislation and contingency arrangements through the disaster management regulations is no longer required to assist and protect the public, provide relief to the public, protecting property, preventing or combatting disruption or dealing with the destructive and other effects of the disaster," she said.