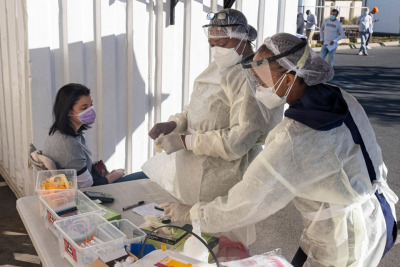 The National Institute for Communicable Diseases (NICD),reports 4,592 new COVID-19 cases that have been identified in South Africa, which brings the total number of laboratory-confirmed cases to 3,556,633.

This increase represents a 12.5% % positivity rate.

Due to the ongoing audit exercise by the National Department of Health (NDoH), there may be a backlog of COVID-19 mortality cases reported. Today, the NDoH reports 161 deaths and of these, 64 occurred in the past 24 – 48 hours. This brings the total fatalities to 93,278 to date.

Meanwhile after two years of contagion and death, Covid is shifting again. Omicron is spreading faster than any previous variant, but it’s also proving less malevolent. There’s growing talk that the worst pandemic of the past century may soon be known in another way — as endemic.

Spain threw out the idea this week, when Prime Minister Pedro Sanchez said it’s time to think about new ways of living with Covid long term, such as the world does with the flu. Other countries jumped in, saying they may be moving toward a new chapter of the disease.

Health experts, however, are preaching caution, saying there’s too much uncertainty about how the virus will evolve, how much immunity society has built up and potential damage if people stop being careful.

It’s inevitable that governments will eventually need to regard Covid as one of many public health challenges that can be managed — rather than one requiring the urgency and focus devoted since early 2020.

The appetite for economically damaging lockdowns is long gone. Vaccines are protecting swathes of the population, and there’s even hope that omicron, with its frenetic spread and less powerful punch, may be hastening the path to the pandemic’s exit.

"We probably are starting to see a transition phase toward this becoming an endemic disease, which doesn’t mean that we have to stop being very prudent," Spain’s deputy prime minister, Nadia Calvino, told Bloomberg Television.

But it does signal that we should take measures that are very different to the ones we had to take two years ago."

It’s not just governments hoping 2022 is the year Covid can finally move to the back burner of public discourse. A weary public is also desperate to escape, and Internet searches for the term “endemic” have jumped in recent weeks.

Endemic would mean the disease is still circulating, but at a lower, more predictable rate — and with fewer people landing in hospitals.

The term sometimes means a disease is limited to a specific region, but that doesn’t have to be the case with Covid, just as the flu regularly crisscrosses the globe. Seasonal patterns can happen, too, with higher cases in winter, as well as local outbreaks above the expected norm.

At the least, there are reasons to hope that the pandemic’s grip is loosening. The world has more tools than before, from rapid tests to the ability to update and mass produce vaccines, plus rising levels of immunity through inoculation and earlier bouts of Covid.

While antibodies may dwindle, or even fail to stop infections from new variants, the other major weapon of the immune system — T cells — appears to be robust enough to prevent serious disease.

Multiple studies, meanwhile, point to omicron as being less severe than previous strains. Beyond that, it appears to already be burning out in some places. The rate of new infections in South Africa is falling after December’s surge, while hospital admissions in the UK are leveling off.

Such evidence is "encouraging in some ways, but we have to stay very vigilant," said Noubar Afeyan, co-founder of Moderna Inc.

The vaccine maker is preparing an omicron-specific booster that could be ready to enter trials within weeks, he said. Reaching the endemic phase is possible this year, but there’s "still uncertainty."

The World Health Organisation, for one, is urging caution. Despite the global vaccine push — now approaching 10 billion doses administered – there are massive gaps. More than 85% of the population of Africa hasn’t received any dose, while 36 WHO member states haven’t even reached 10% coverage.