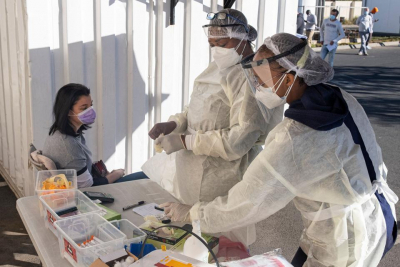 The National Institute for Communicable Diseases (NICD), reports 3,520 new Covid-19 cases in the past 24 hours, which brings the total number of laboratory-confirmed cases to 3.576 379.

This increase represents a 10.0% positivity rate.

"Due to the ongoing audit exercise by the National Department of Health (NDoH), there may be a backlog of COVID-19 mortality cases reported. Today, the NDoH reports 103 deaths and of these, 10 occurred in the past 24 – 48 hours. This brings the total fatalities to 93,949 to date,"said the NICD.

This loan will support the government’s efforts to accelerate its Covid-19 response aimed at protecting the poor and vulnerable from the adverse socio-economic impacts of the pandemic and supporting a resilient and sustainable economic recovery, Treasury said in a statement on Friday (21 January).

"The World Bank budget support is coming at a critical time for us and will contribute towards addressing the financial gap stemming from additional spending in response to the Covid-19 crisis," said Dondo Mogajane, director-general of the National Treasury.

"It will assist in addressing the immediate challenge of financing critical health and social safety net programs to develop our economic reform agenda to build back better."

Treasury said the funding is a low-interest loan that will contribute to South Africa’s fiscal relief package. It follows support that has already been given by a number of international monetary groups, including the International Monetary Fund, the African Development Bank and the New Development Bank.

As the second-largest economy in Africa, the World Bank noted that South Africa’s economic performance has spillover effects on other countries in the region. Its recovery and successful economic development will provide an economic boost to the whole region, it said.

World Bank country director for South Africa, Marie Françoise Marie Nelly, says this loan will assist the government in turning the tide for the economy.

"This support aims to put the country on a more resilient and inclusive growth path by leveraging South Africa’s strength to mitigate the effects of the Covid-19 crisis through their strong social safety net and by advancing critical economic reforms," Marie Nelly said.

The loan comes ahead of finance minister Enoch Godogwana’s maiden budget speech in February, during which he is expected to announce several additional support measures for South Africans.