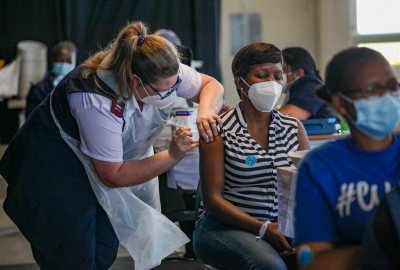 The Department of Health has refuted claims by the Commission for Gender Equality (CGE) that vaccines may cause a small change to the women’s menstrual cycle length, citing a "new study" published in the Obstetrics and Gynaecology medical journal.

The CGE said: "When scientists establish a connection between COVID-19 vaccinations and women’s reproductive health, such as menstrual cycles, many women may not be comfortable taking vaccines, due to possible long-term effects. These women’s wish to delay vaccinating should be respected in the context of our country’s human rights' commitment".

The Commission went further and warned against imposing mandatory COVID-19 vaccination on employees and students.

However, the department has since rebutted the Chapter 9 institution’s statement that was released on 16 January 2022.

"It is of concern that the statement released by the CGE on menstrual irregularities associated with COVID-19 vaccines appears to have been done without consultation with any of expert institutions."

The department also believes that the statement has not considered all available evidence and the substantial benefit associated with vaccinating women of reproductive age and pregnant women.

"The department respects the freedom of expression by any individual or organisation as enshrined in the Constitution of the Republic. However, we believe such freedom should be exercised responsibly to impart information or ideas to empower our people to make well-informed health choices during these difficult times."

The department has also backed the latest media release by various organisations in the health sector, including the South African Medical Research Council (SAMRC) disputing the facts presented by the CGE.

"COVID-19 vaccines are highly effective against severe illness, and immunising women of reproductive age is important as both South African and global data have clearly shown that SARS-CoV-2 infection in pregnancy significantly worsens obstetric and neonatal outcomes, making it imperative that vaccination programmes target young women before and during pregnancy."

In addition, it emphasised that the current discussions around vaccine mandate have no bearing on the effectiveness and efficacy of COVID-19 vaccines.

"We dismiss any argument against the constitutionally of vaccine mandate based on fallacious and non-scientific evidence."

"The conclusion by the Commission that 'many women may not be comfortable taking vaccines, due to possible long-term effects' is not supported by data and is not based on a risk-benefit analysis."

The department is of the view that the CGE’s statement may contribute to misinformation and vaccine hesitancy in young women, and at its worst, lead to maternal and neonatal deaths.

The department said it would also be engaging with the CGE further on the matter.

Meanwhile the National Institute for Communicable Diseases (NICD), reports 3,197 new COVID-19 cases that have been identified in South Africa, which brings the total number of laboratory-confirmed cases to 3,585,888.

This increase represents an 8.8% positivity rate.

Due to the ongoing audit exercise by the National Department of Health (NDoH), there may be a backlog of COVID-19 mortality cases reported. Today, the NDoH reports 132 deaths and of these, 23 occurred in the past 24 – 48 hours. This brings the total fatalities to 94,397 to date.