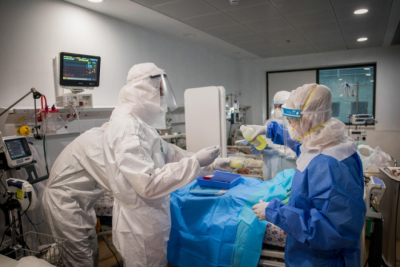 The National Institute for Communicable Diseases (NICD), reports 9,757 new COVID-19 cases that have been identified in South Africa, which brings the total number of laboratory-confirmed cases to 3 818 125.

This increase represents a 25.9% positivity rate.

Today, the National Department of Health (NDoH) reports 64 deaths and of these, 7 occurred in the past 24 – 48 hours. This brings the total fatalities to 100,471 to date.

South Africa is still a long way off previous records. The largest daily count for new cases was 26,976, reached on Dec. 15, and the highest positivity rate was 33.4%, reported on Jan. 4. But the fifth wave comes just as winter starts and just after the country ended its more than two-year National State of Disaster.

While the government now no longer has the ability to broadly override the rights of citizens, it has implemented new health legislation that will require proof of vaccination or negative tests for some gatherings and the continued wearing of masks in indoor spaces.

It's possible the fifth wave will be the least onerous so far. The new omicron sublineages appear to be less severe than the original and the fifth wave is unlikely to cause "even anything close" to the number of hospitalizations and deaths that occurred when omicron first appeared in November, according to Shabir Madhi, a vaccinologist from the University of the Witwatersrand.

Nonetheless, health experts and the government are urging citizens to get vaccinated, receive their boosters and continue taking precautions against the virus.