SA records 3 801 new cases with a study showing a decline of vaccine hesitancy. 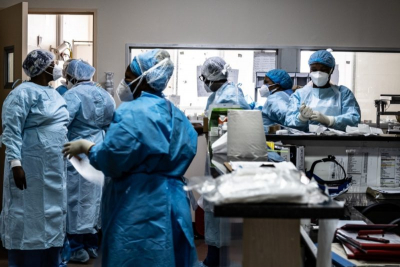 The National Institute for Communicable Diseases (NICD),reports 3 801 new COVID-19 cases that have been identified in South Africa, which brings the total number of laboratory-confirmed cases to 3 944 845.

This increase represents an 14.9% positivity rate.

There has been an increase of 112 hospital admissions in the past 24 hours.

Due to the ongoing audit exercise by the National Department of Health (NDoH), there may be a backlog of COVID-19 mortality cases reported. Today, the NDoH reports 49 deaths, and of these, 16 occurred in the past 24 – 48 hours. This brings the total fatalities to 101,092 to date.

A University of Johannesburg (UJ) and Human Sciences Research Council (HSRC) COVID-19 Democracy Survey has found that vaccine hesitancy declined slightly from 28% in July 2021 to 25% in November 2021.

The online survey, which was a partnership between UJ and the HSRC, was conducted using the data-free Moya Messenger app, which has six million subscribers and 800 000 users per day.

Majikijela was speaking during a webinar on COVID-19 Vaccine hesitancy, led by Deputy Minister in Presidency, Pinky Kekana, with the Deputy Minister of Health, Dr Sibongiseni Dhlomo, as one of the panellists.

"Results show that the 'accepting' are increasingly getting the COVID-19 vaccine, but a large share of this group remain unvaccinated, "she said.

Majikijela said the share that is hesitant declined only marginally during 2021.

Looking at vaccine acceptance and hesitancy by demographics, the survey showed that the 18 - 34 age group was more hesitant compared to other age groups.

In terms of gender, females were more hesitant compared to males. Meanwhile on population group, the levels of hesitancy within white people remain higher than among black African or Indian and Asian adults.

Self-reported explanations for vaccine hesitancy include the following:

Speaking at Thursday's the webinar, Kekana said vaccine hesitancy prevents the country from living beyond the pandemic and focusing on the Economic Reconstruction and Recovery Plan (ERRP) aimed at rebuilding the country.

She said that vaccine hesitancy among the world is neither new nor unique to COVID-19 vaccines.

Kekana said the country is nearing the halfway mark for adult vaccination, with almost half of South African adults having at least one COVID-19 vaccine, which is nowhere near the 70% of the population being fully vaccinated.

The Minister said the survey tested thousands of citizens and some of the major reasons from the study show that technical language and medical jargon cause people to ignore information; but on the other hand, people also do not trust government’s communication.

Addressing issues raised in the survey

Kekana said government will address some of these issues that have arisen in the survey.

"In our goal and commitment to leave no one behind and ensure that we build back better, it is incumbent upon us to drive a vaccine confidence strategy.

"We know that some things we cannot fix overnight, one of them being the trust in government due to the extensive levels of corruption. I can only say and show it in my actions that not all of us are involved in anti-nation building and corruption, [and] give you reason to be suspicious. Some of us are focused on the well-being of our people," Kekana said.

Dhlomo said the health consciousness factor and health seeking behaviour in a population are important.

He said the country must allow themselves to be advised by scientists when it comes to issues of health.

He said the 'Ke Ready' campaign was done by young healthcare professionals, who wanted to reach out to the young population and get them to understand how vaccines work and get to vaccinate.

"Let us continually service our bodies, including trusting advice when asked to come in for vaccination. Vaccine is the only defence mechanism to the COVID-19 virus, which is the reason we ask you to make a commitment to vaccinate," he said.

More in this category: « SA records 5 284 new COVID-19 cases with 6 related deaths in past 24 hours. NICD reports 3 274 new cases with govt going to recognise valid vaxx certificates. »
back to top