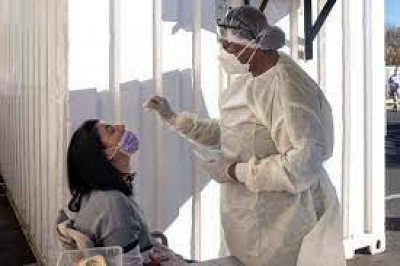 The National Institute for Communicable Diseases (NICD), reports 1,976 new COVID-19 cases that have been identified in South Africa, which brings the total number of laboratory-confirmed cases to 3 975 062.

This increase represents an 8.7% positivity rate.

Deputy President David Mabuza says both houses of Parliament has a role to play in ratifying the World Health Organisation’s proposed Global Pandemic Treaty before it becomes international law.

Mabuza said this when he responded to oral questions during a sitting of the National Assembly on Wednesday.

"Parliament will have a role in the ratification of the treaty once concluded, as international agreements become law after being approved by the resolution in both the National Assembly and the National Council of Provinces.

"Simply, this means that international agreements become national law only upon ratification by Parliament," he said.

ACDP leader, Reverend Kenneth Meshoe, had asked the Deputy President if he, as a leader of government business, intended to ask health Minister, Dr Joe Phaahla, to appear before Parliament to canvass the views of the House before signing the treaty.

Mabuza said it goes without saying that the Minister of Health is enjoined by the Constitution to submit the treaty to Parliament for consideration and approval.

"For South Africa, it is crucial that the treaty is anchored on human rights to ensure equitable access to available medical solutions in order to improve the health and well-being of all, regardless of socio-economic status or geographical location."

This comes after the World Health Assembly agreed at a Special Session held on 29 November to 01 December 2021 to start a process of developing and negotiating a treaty on pandemic prevention, preparedness and response.

Mabuza said to this end, an intergovernmental negotiating body was set up to lead the negotiations and drafting of the treaty, in consultation with various stakeholders including Member States and civil society organisations.

"Drawing on the lessons that were learnt from responding to the COVID-19 pandemic, the proposed Global Pandemic Treaty will complement the International Health Regulations.

"To this end, the agreement will seek to outline the objectives and fundamental principles necessary for effective collective action to fight against the pandemics, address gaps in the current legal framework, and clarify roles and responsibilities of states and international organisations, among others.

"It is envisaged that this global treaty will, among others, enhance surveillance of pandemic risks and alerts; ensure uninterrupted health supplies and services and effective research and innovation for timely development of vaccines, treatments and diagnostics; ensure better response mechanisms and implementation; as well as restore trust in the international health system.