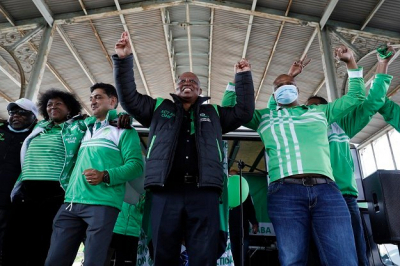 Former Joburg mayor Herman Mashaba has cast his vote at the Sandton Fire Station this morning.

The ActionSA leader was met with enthusiastic greetings from Sandton residents as he stood in line.

He was jokingly asked if he would be returning as Johannesburg mayor.

Mashaba's party, ActionSA, will be contesting elections for the first time since its founding in August 2020.

The party's internal polling had projected it would do well in Johannesburg, Tshwane, and Ekurhuleni – the three metros it will be competing for. The party is also contesting KwaZulu-Natal.

Meanwhile the IEC voting station at Hitekani Primary School in Chiawelo, Soweto, where President Cyril Ramaphosa will be casting his vote, has been open since 07:00, but has remained virtually empty.

Most of the crowds in attendance are the media contingent here to cover the president. Residents frown the Chiawelo area have chosen to either take part in a service delivery protest, or stay away from the polls.

The 2021 Local Government Elections will be South Africa’s sixth municipal elections since the dawn of democracy in 1994 to elect councils for all district, metropolitan and local municipalities in each of South Africa’s nine provinces.

More in this category: Primary goal is to get a majority,but open to coalitions with conditions - Steenhuisen. »
back to top