Primary goal is to get a majority,but open to coalitions with conditions - Steenhuisen. 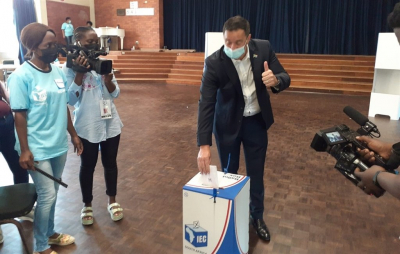 DA leader John Steenhuisen cast his vote at Northwood Boys High School, north of Durban and says that he would be open to party coalitions, but only under certain conditions.

Steenhuisen walked through the gates of the school, followed by a trail of supporters who ululated and danced around him.

He cast his vote at his former school, where he said he is proud to do so.

"We are going to go into this election and get as many DA votes in the ballot box, and thereafter we will sit down and have a look at forming coalitions where we don't have a majority, but those coalitions will only be with parties that share our values and principles of non-racialism, respect for the rule of law and the Constitution, a social market economy and a capable state," he said on Monday.

Steenhuisen was addressing a contingent of journalists in Durban North where he cast his vote for the 2021 local government elections.

"If you believe in those four fundamental things, we are willing to talk to you," he said of the DA's conditions.

Steenhuisen said that he was pleased with the work the party had done in KwaZulu-Natal.

"I think we have run a great campaign here in KZN. Our message of 'we get things done', I think, has resonated. A lot of municipalities in this province are in deep trouble like they are around the country. I think people are looking for hope and change."

Steenhuisen said he was not worried about his future in the DA post-municipal elections, affirming that he would remain in the party for the rest of his life.

More in this category: « ActionSA,Herman Mashaba cast his vote at Sandton Fire Station. 'It’s been a few weeks of hard work,this is culmination of our election campaign' - Ramaphosa. »
back to top