'It’s been a few weeks of hard work,this is culmination of our election campaign' - Ramaphosa. 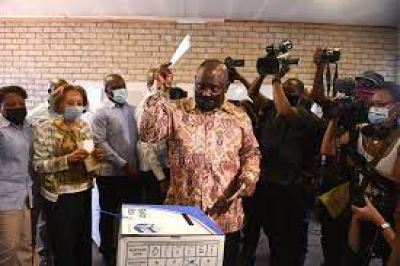 South African President Cyril Ramaphosa has urged all registered voters to exercise their right to vote in the local government elections on Monday.

Ramaphosa cast his vote at Hitekani Primary School in Chiawelo in Soweto on Monday.

Speaking shortly after voting, Ramaphosa, who was accompanied by first lady Tshepo Motsepe, said: "My wife and I have just voted and we are delighted. I’m delighted that finally this is the culmination of our election campaign."

"It’s been a few weeks of real hard work but I’m glad many South Africans are seemingly excited to exercise their democratic right."

Chiawelo is the area where Ramaphosa grew up. His sister Ivy still resides at the family home, not too far from the school.

En route to the voting station, the president would have seen the aftermath of service delivery protests which scarred roads in the surrounding area.

Mbeki voted on Monday morning at the Holy Family College in Houghton.

On his message to the new councillors,Mbeki said honest people were needed.

"We need honest people, not thieves. I was voting now hoping that the party or person I voted for will be honest and be able to serve the people. Hopefully that will be the nature and character of the people who will have the seriousness to attend to the challenges," Mbeki said.

Mbeki stressed the importance of a high turnout.

"I am hoping that all these registered voters will follow. We need all our people to vote and express their view as to who they want to govern the municipalities. I really hope we will have good turnout," Mbeki said.

Former president Jacob Zuma has arrived to cast his ballot at the Ntolwane Primary School, at his village of KwaNxamalala in KwaZulu-Natal.He was with his wife Bongi Ngema.

Zuma said he voted "very well", and he is very happy. He said he won't hide that he is voting for the ANC. He is very jovial as he engages with the media.

Also former president Kgalema Motlanthe cast his vote on Monday in Killarney,Johannesburg and He said he remained hopeful of seeing change in their respective wards and the greater Johannesburg metro after the election.

More in this category: « Primary goal is to get a majority,but open to coalitions with conditions - Steenhuisen. Journalist Ziniko Mhlaba released after arrest in Soweto voting station. »
back to top