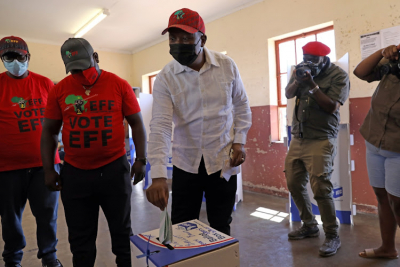 Economic Freedom Fighters (EFF) leader Julius Malema says he believes the vote of young South Africans could be decisive when all the votes are tallied in the local government elections.

Malema cast his vote at Mponegele Primary School in Limpopo on Monday.

He said the number of young people at EFF rallies is proof of the interest taken by them in the future of the country.

"At some point I thought there was apathy, but the rallies of the EFF have actually changed my perception in regard to voter apathy within young people."

Malema said the youth know they will need to play an active role if they want change.

"I think youth highly interested and will come out in numbers. I think they now realised that they can't leave it in the hands of their parents, they too have to take an active path, if they want those changes."

He also believes victory is imminent for the party.

"We are going to get 65% in Polokwane and in the whole of South Africa. We are aiming for a decisive victory and we have done everything humanly possible."

Meanwhile Prince Mangosuthu Buthelezi says he warned the ANC against making the country ungovernable under Apartheid as he feared it would create legacy issues for a future black government.

Buthelezi cast his ballot at the Buthelezi traditional court in Ulundi on Monday.

"As someone who grew up in the ANC... there are many things that make me disappointed.," he said when asked about political violence in the run-up to the election.

He believes that the majority of the violence emanates from the governing ANC.

"When I see incidents where people kill each other because they want to get places and be elected as candidates - I really cry for my country," said Buthelezi.

Buthelezi says he was party to discussions in the days of OR Tambo when the ANC was in exile.

Elsewhere disgruntled residents of Qunu near Mthatha in the Eastern Cape, who have been longing for water since 1994, hope that, by voting in Monday’s local elections, they will have access to this basic human right.

Qunu is the home of the late former president of South Africa, Nelson Mandela, who is celebrated around the world as the father of democracy in the country.

Madiba was not only instrumental in ushering in this country’s freedom and democracy, including the right to vote, but was known for being a champion for access to basic human rights.

More in this category: « Presiding officer caught stuffing ballot box in eThekwini - IEC. DA files a complaint with IEC over voter management devices. »
back to top