DA files a complaint with IEC over voter management devices. 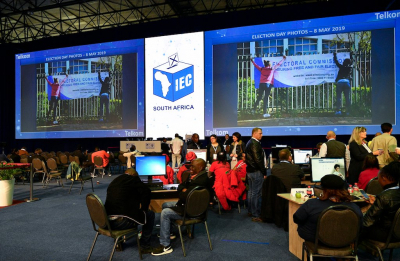 The DA has filed an official complaint with Electoral Commission of South Africa (IEC) over malfunctioning voter management devices.

DA campaign manager Werner Horn confirmed the party had filed a complaint with the IEC over the issue.

The IEC was this afternoon locked in a meeting, at the National Results Centre in Tshwane, with party liaison committee members addressing various concerns related to voting.

The devices were one of the issues the committee was expected to address.

Issues over the devices, which are being used for the first time in this year's elections, have seen some voting stations stay offline for hours leading to snaking lines.

The devices are used to track a voter's registration details.

Horn explained that the DA was concerned that its supporters would be unable to vote because of the issue.

The DA stronghold areas where the party alleged there were issues included: wards in Cape Town, Nelson Mandela Bay, Polokwane, and some suburbs in Johannesburg.

Meanwhile IPID is investigating a case of assault after DA Federal Chairperson Helen Zille was allegedly mishandled by a police officer, the police watchdog said.

It is reported that Zille opened a case of assault against a police officer after they mishandled her at the Bethelsdorp police station.

WATCH: Helen Zille was just physically dragged out of a voting station near Port Elizabeth by Police. pic.twitter.com/ba5a6ZzxTR

Zille is said to have been dragged out of the Fernwood Primary School voting station in Nelson Mandela Bay by the police on Monday. The incident was caught on video.

More in this category: « 'We are going to get 65% in Polokwane and in the whole of South Africa' - Malema Voting stations officially closed with results expected after midnight. »
back to top