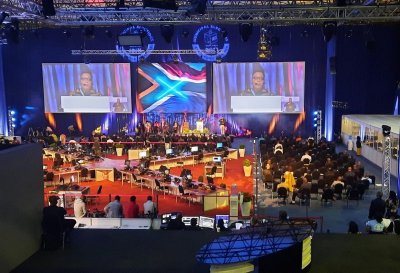 The Independent Electoral Commission has announced the first result in the 2021 local government elections.

The result is for Voting District (VD) 442 (Mvomvo Lodge) in the Umzimvubu Local Municipality, which falls under the Alfred Nzo District in the Eastern Cape.

Ten people were registered to vote at the VD.

The Electoral Commission is happy to announce the first results of the #LGE2021.

For the #LGE2021, the first results came from Imvomvo Lodge voting station from Umzimvubu in the Eastern Cape province. pic.twitter.com/K5IwFmEhYa

Meanwhile the Electoral Commission of South Africa (IEC) has vehemently defended its faulty Voter Management Devices (VMDs) notwithstanding the fact that 67 000 voters were initially reportedly affected by the devices inefficiencies.

Addressing the media on Monday evening, IEC National Senior Manager Electoral Operations IEC, Granville Abrahams confirmed that initially the commission had reported that about 67 000 voters had been affected by issues pertaining to its VMD, but after investigation, it was understood that the number of affected voters was actually 32 000.

Abrahams said this figure had since dwindled down to 6 000 affected registered voters who had yet to vote after their identification documents where scanned and they had been unable to vote as a result of the VMD faults.

The commission, however indicated that the matter was receiving its attention as the IEC had sent text messages to all the affected parties informing them that the issue had been rectified and they could therefore cast their votes.

Information coming out of the IEC's national party liaison special meeting held on Monday was that the ANC, the DA, and the Freedom Front Plus have laid complaints with the commission regarding the faulty VMD machines.