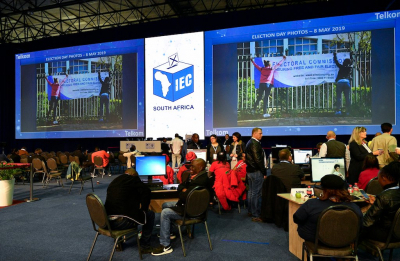 Results are slowly starting to trickle in as counting continued through the night.

In early results on Tuesday morning, a clear trend began to emerge that ActionSA was a popular choice in the municipalities it chose to contest and focus on intensively.

Particularly in Johannesburg, former mayor Herman Mashaba stands to take a sizeable share of the vote from his former party, the DA, while also possibly hurting the ANC.

The early mood also suggested that the EFF was largely able to rely on its faithful army of red berets after it mounted an energetic nationwide campaign.

The elections took place amidst Covid-19 conditions, and with a short campaigning period after the Constitutional Court ruling.

The ANC’s struggles in the DA strongholds of Cape Town and Midvaal (Meyerton) continued as results emerged from these two municipalities. More worryingly for the ANC, early results from pockets of Johannesburg suggest that the party was being affected by a very low turnout in its traditional strongholds and Mashaba’s ActionSA.

There is a very long way to go, but the current picture is not promising for the ANC and its new Johannesburg mayor,Mpho Moerane. The party will hope that results start emerging from its Soweto strongholds in Orange Farm, in the deep south of the city and the western edge of Soweto (Emdeni, Doornkop, Meadowlands, Tshepisong).

If these trends continue, the ANC will fall well short of the 50% mark, and it will be hoping it can cobble a coalition together to continue governing the economic powerhouse of the nation.

There were rumblings of a green wave emerging in the suburbs. Early results suggest that the DA has seen its large vote share in its northwestern and northern strongholds of Johannesburg affected by ActionSA. ActionSA also seems to have eaten into the ANC vote share in some Soweto voting districts. The Freedom Front Plus (VF+) saw its impressive gains from this election continue as its vote share shot up in voting districts across Emfuleni (Vanderbijlpark) and Midvaal.

Geordin Hill-Lewis (34) is well on track to be the next mayor of Cape Town. The DA’s shadow minister for finance ran a solid campaign which covered the length and breadth of the city over the past two months. Hill-Lewis will replace Dan Plato, also from the DA.

More in this category: « IEC announces first result of the 2021 local elections in an Eastern Cape Voting District. Coalitions set to come into play as IEC tallies votes. »
back to top