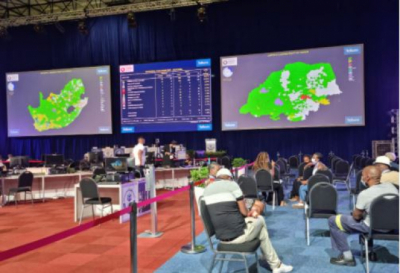 With the first day of vote counting still underway in the 2021 Local Government Elections, more than 50% percent of the votes have been counted.

According to the Electoral Commission (IEC) dashboard at 19:19 on Tuesday, 51% of the national vote count had been completed, with the African National Congress (ANC) leading with 46.4% support, followed by the Democratic Allowance (DA) with 22.64% and the Economic Freedom Fighters (EFF) with 9.1% support.

The Northern Cape was the leading province with 88% of the vote count being completed at this hour with the ANC leading with 49.6% support, followed by the DA at 21.27% support and EFF at 8.99% support.

Meanwhile the IEC says it is investigating complaints of ballot boxes which fell from "unsuitable transport" in the Blouberg local municipality in the early hours of Tuesday morning.

It said the materials were being rolled back from an office to a warehouse at the time. The EFF was one of the complainants.

EFF provincial leader Jossey Buthane said: "The IEC is taking us for a ride. How do you say the transport you procured yourself is unsuitable? "How do you know it's only spoilt ballots that fell from the vehicle. We are asking the IEC to respect us and respect itself," Buthane said.