With 96.9% counted,ANC will have to scramble for coalition partners in all provinces. 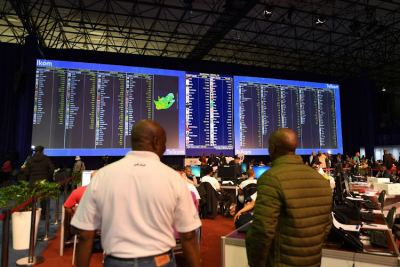 After three days of ballot counting and capturing results, the Electoral Commission of South Africa (IEC) has confirmed that 96.9% of the votes have been calculated as of Wednesday evening.

IEC General Manager Granville Abrahams,said 96.9% of the votes have been finalised and collated,the results are awaiting capturing and auditing.

In real numbers, he said the 64 062 out of the expected 64 502 results have been captured in the system, while 62 539 have been audited and 58 956 have been scanned into an image and available to participants.

"We previously indicated, the Commission remains committed to finalising the results expeditiously," he stressed.

Meanwhile,the IEC announced that the number of completed municipalities stands at 177 from the total of 257.

The IEC said it has received 80 complaints and objections and that the Presiding Officer deals with many of these.

IEC told journalists that there are many lessons learnt from this year’s Local Government Elections. However, the leadership will have an opportunity to debrief the political parties, staff and observers.

"And from those then we will carry out lessons that will inform future legislative amendments, other policy adjustments,"he said, adding that the glitches they experienced sharpen training.

"We can't go back. We've got to move forward and ensure that we improve the proficiency of use and other related operational matters, it's been a very important national investment to fortify controls around the electoral process."

With nearly all votes counted,the ANC will have to scramble for coalition partners in all nine of the province's municipalities.

Beyond the metros, bad service delivery in municipalities like Emfuleni and Rand West has led to the ANC losing its firm majority. The ANC in the province will have to have a hard talk about what this means for its future prospects.

The 2021 municipal elections is expected to mark the first time since the 1994 elections that the ANC received less than 50% of the vote.

Click on the interactive map above to find the latest election results for your municipality, courtesy of the Independent Electoral Commission of SA (IEC) - 2021 Local Government Election Results.

More in this category: « Progress in relation to the finalisation of results now stands at 79%. IEC expected to release 2021 Municipal Election results at 6pm. »
back to top