Municipal Elections another milestone in the advancement of democracy - Ramaphosa. 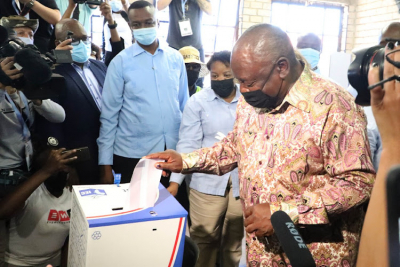 The 2021 Local Government Elections have proved that multi-party politics is flourishing in South Africa and that everyone has an equal chance and opportunity to run for public office, President Cyril Ramaphosa says.

The sixth Local Government Election was contested by a record 325 political parties and nearly 95 000 candidates, of whom over 1 500 were independent candidates.

Ramaphosa said that this enriches the country in many ways, advances openness and transparency and affirms the principle that leaders must be chosen by the people and be accountable to the people.

The statesman was speaking at the National Results Operations Centre (ROC) in Pretoria on Thursday, during the release of the 2021 Local Government Election results.

"Tonight we mark another milestone in the advancement of our democracy. In the run-up to Election Day we have seen images of parties and candidates everywhere, on billboards, on street posters and on social media, all making a case for why they should get our vote. This affirms that we are a diverse and tolerant society," the President said.

Ramaphosa went on to thank the 12 million South Africans who cast their ballots in this election.

"By performing this important civic duty you have contributed to strengthening and consolidating democracy. I want to congratulate all South Africans for holding an election that was peaceful, free and fair,"he said.

He said the people have spoken and the elected councillors now need to get down to work.

The President said that over the past few weeks, officials have all spent time with South Africans from all walks of life and they expressed their frustration with service delivery while others spoke about the good work that municipalities, supported by dedicated councillors are doing in their communities.

"Listening to them I was reminded how important it is that those in positions of responsibility enjoy the confidence of the South African people. They want their lives improved. They want better services.

"They want their representatives to be responsive and accountable. They want to live in a better South Africa with equal opportunity, where their rights are realised, and where they are treated with dignity and respect," the President said.

While calling on leaders to put their differences aside and work together, the President said that local government must be a force for good, for development and for progress.

"If we are to make this a new and better era, we, as leaders, must put aside our differences and work together in a spirit of partnership and common purpose.

"We need to strengthen the trust between citizens and elected representatives through competence, integrity, performance and delivery. Public representatives need to be more visible and active in our communities,"he said.

The President called on elected leaders to listen to the communities they serve and focus on implementation and make the people partners in development.

More in this category: « IEC hails electorate for participation in the municipal elections.
back to top