IEC hails electorate for participation in the municipal elections. 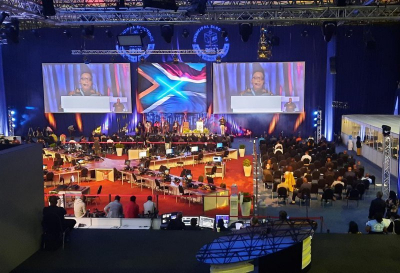 He was speaking during the announcement of the final results of the elections at the National Results Operations Centre in Pretoria on Thursday evening.

"The election we have just had, had in its path contours and meandering turns. It was an election characterised by uncertainties at some points in the journey and possibilities at others. At times it was perceived as an election in doubt, for we never were sure about its safe conduct.

"It is an election that created diametrically opposed and intense sentiments in the political landscape. The desired linear path to planning was rendered asunder. Yet despite this uneven and oblique path, we have experienced a people involving themselves in the act of electoral engagement….that avails to the citizenry a moment to constitute municipal councils,"Mamabolo said.

Mamabolo hailed the 12 million South Africans who cast their vote in what was billed as the most contested elections in the country’s history, in the most challenging set of health related circumstances.

"We thank you for your simple and humble act of voting," he said.

The Chief Electoral Officer made special mention of those who contested the elections because "our electoral reality is hollow" without their participation.

Mamabolo reminded those who emerged victorious that their wins are due to the electorate.

"To the 10 400 elected councillors, we raise our hands to you in a congratulatory wave. To the voters who bestowed trust in your ability to service communities you now represent, you owe them a measure of gratitude.

"Our proposition is that the best reward you can offer them is selflessness and civic mindedness towards communities that you now represent," he said.

Mamabolo reflected that the commission and its staff has been singularly focussed on delivering free and fair elections since September.

"My colleagues in the exco, the management committee and all staff of the commission at all levels have not known sleep since 3 September. We collectively had to put together a registration weekend, opening 23 000 registration stations literally in two weeks.

"We had an option to take the easy route of dispensing with the registration weekend yet we decided on the arduous task because it enfranchised our fellow compatriots. As if that was not hard enough, the election timetable activities had to be conducted in 42 days. I say to you when your country needed you, you answered the call of national duty," he said.

More in this category: « Livestream: IEC announces 2021 LGE Results as ANC and DA fails to get a majority in Joburg. Municipal Elections another milestone in the advancement of democracy - Ramaphosa. »
back to top