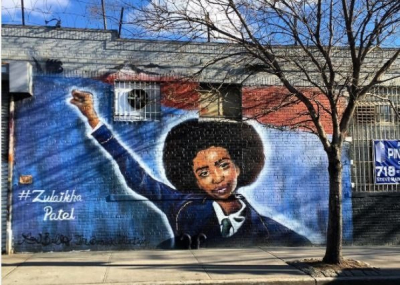 "We must celebrate the heritage of Afro hair, and encourage young girls to embrace their hair and be proud of their natural beauty!" Having lived a courageous and sometimes difficult journey in relation to her own hair, author and activist Zulaikha Patel has written the children’s book, "My Coily Crowny Hair," illustrated by Chantelle and Burgen Thorne, the foreword written by Nomzamo Mbatha, and published by Lingua Franca Publishers, to empower and encourage girls from an early age to embrace and not to be ashamed of their Afro hair. "I want to spark a global and meaningful conversation about Afro hair amongst parents/guardians and children, which will hopefully create a culture of self-love, self-care and confidence," says Patel.

The book approaches the issue of Afro hair through the eyes of the main character Lisakhanya, a 7-year-old girl who draws courage from her mother, grandmother and the African queen, to celebrate her hair and to style it in the many different creative hairstyles that girls from around the world can relate to. These include an Afro, braids, bantu knots, Ben and Betty, twists, a tied up phondo, and many others.

"One morning, on Africa Day, Lisakhanya is preparing to visit the museum with her cousins, Olerato and Khensani, and Gogo. Mama styles her hair in a braided afro. Lisakhanya looks like the young queen that she is."

The story emphasises that girls are brave and smart , and can have limitless potential if they believe in their own worth.

"You can be an engineer, a speaker, a teacher or even a president! With your hair, you can be anything that you want to be."

The story resonates strongly with Patel, who first grabbed the world’s attention when she became the symbol of the fight against institutionalised racism at Pretoria High School for Girls, at the age of 13. She led a protest against institutionalised racism in schools in South Africa and the decolonization of hair policies in schools, which was followed by several protests across South Africa in schools such as Lawson Brown High School and many others.

Zulaikha Patel is an anti-racism and social justice activist, an international speaker and writer. She is the youngest Ambassador to the Charlotte Mannya Maxeke Institution, which is a Non-Profit Organisation born out of desire to preserve, promote, elevate and leverage the legacy left behind by Charlotte Mannya Maxeke, who had been the first Black woman to graduate with a BSC degree in Southern Africa.

Patel works within the Charlotte Mannya Maxeke Institute on an annual programme to empower and upskill girls from underprivileged backgrounds, named "Bring Her Up", which is a community initiate that seeks to connect young girls in our societies under the vision of unity and oneness. "Bring Her Up" is a sisterhood network created for women to uplift, upskill and celebrate their worth.

Patel was the youngest South African woman recognised on BBCs 100 Most Influential Women in the world at the age of 13. She was also one of the youngest women to receive the Mbokodo Award in the category "Women in the Media" in 2016, under Carol Bouwer Productions, which recognises women who have shown leadership  and fostered growth.

Her efforts have been recognised by African American music artist Solange Knowles on social media, as well as struggle stalwarts Ahmed Kathrada and Sophie De Bruyn at the annual keynote address held by Ahmed Kathrada Foundation where she gave a speech on Black Women Empowerment. Her efforts were further recognised by Professor Angela Davis at the annual Steve Biko memorial lecture held at Unisa in 2016, as well as Professor Thuli Madonsela and CNN Africa in October 2016 under the Hashtag #AfricanGirlsRock. A street artist Lexi Bella later painted a 40ft Mural of Zulaikha in New York on Flushing Avenue in America.

Zulaikha Patel is the youngest female activist featured in the book, "The Black Consciousness Reader," which had been complied as a tribute to the rise of Black Consciousness and the 40th death anniversary of stalwart Steve Biko in 2017. She was also the youngest speaker in a documentary called “Negotiated Settlements,” which is based on South Africa’s negotiated freedom. Zulaikha was also listed in Avance Media’s "100 Most influential Youth in South Africa," in the Civil Society and Leadership category.

In 2018 she made ground-breaking appearances at multiple speaking engagements as the youngest speaker at Breaking Boarders Africa Youth Summit, where she was awarded with the Inaugural Leadership Award for Immense Contribution into championing the next young generation in Africa as well as being the youngest speaker in the history of the Serious Social Investing Conference hosted by Tshikululu in partnership with Firstrand .

In 2019, she was a speaker at the TEDx AFRICAN LEADERSHIP UNIVERSITY event hosted in Rwanda as well as a speaker of the first South African SLAY festival. In 2020, Zulaikha spoke at the Ake Arts & Book Festival hosted in Lagos.

She was most recently a panellist at the 13th Annual Clinton Global Initiative University, in partnership with Howard University and the Clinton Foundation.

Twitter
More in this category: « AKA breaks his silence: 'I'm not a suspect in Anele’s death'. Listen to Your Footsteps by Kojo Baffoe available on pre-order now. »
back to top