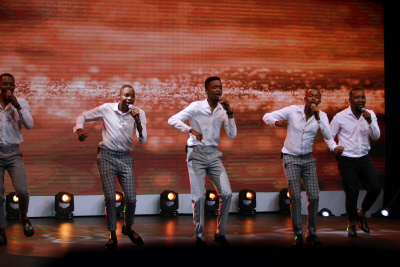 The second season of the Old Mutual Amazing Voices competition spotlights not only Africa’s great musical talent, but also our continent’s tenacity and resourcefulness. Kicking off with a promising start for the pan African music competition we are inspired by the captivating stories and experiences we are hearing from the talent across Africa.

When opportunity comes knocking, you’d better be ready to work hard and be creative about overcoming obstacles. That’s what musical group Southern Six from Gqeberha (Port Elizabeth, South Africa) discovered soon after they sent their online submission. Southern Six’s story began last November when two friends, Thando Nombewu and Mihlali Tyatya, saw the Amazing Voices competition announcement for online audition entries. Together they selected and invited four of their most musically talented friends to join them and enter as a group. They were overjoyed to be invited to the closed audition, but immediately faced a hurdle. The auditions were in Johannesburg, more than 1000 km away. Determined not to let this block their path to success, the six friends posted their best videos as well as their predicament on Facebook, and successfully crowd-sourced the cost of their return flights to the closed audition venue. Southern Six’s resilience, tenacity and positive approach paid off and they managed to impress Amazing Voices selectors Buhle Mda and Morena Sefatsa. They were given the nod to be one of two groups to represent South Africa in the top 10 (which we saw in Episode 2 of the show).

Another inspirational South African group exemplifying talent and tenacity is Hush Male Group. Echoing a similar ethos to Old Mutuals’ 175 years of believing in enabling positive futures and taking those small steps today to achieve great things tomorrow, Hush was formed on a foundation of brotherhood, friendship and faith. Most of this six-man group hailing from Johannesburg in South Africa, were friends through school, united by their passion for music and faith. Always looking at the opportunities to improve their talent, the first members of Hush felt the need to fill a spot in their group to make them their exceptional best. They identified a young man they believed to be the right fit. However, they were unsuccessful in locating him and by chance came across his brother, Sinethemba 'Sne' Magubane and the rest is history. Sne became the perfect final piece of the group as his voice blended so well with their sound that he has since became a member. Clearly showing how opportunities can arise when one least expects it.

For some contestants, the show has been a different kind of platform of learning and window of opportunity. Loyiso Ralarala, (from Soweto, South Africa) for example, auditioned in Amazing Voices Season 1 and was so inspired by what he saw and experienced behind the scenes in 2020, that he took his career path on a totally different tangent. Ralarala saw how he could grow his career opportunities by learning the technical ins and outs of what happens behind the scenes of a show of this scale, which he did. This year he has taken his passion for the entertainment industry and applied it differently and has joined Season 2 as a valuable part of the production crew.

Whether it is the Southern Six’s group members, or even Ralarala, Old Mutual Amazing Voices is far more than a competition. It’s a real springboard of opportunity for all involved in this production to learn and be mentored by a host of experienced people in the entertainment industry.

Twitter
More in this category: « YouTube, MTV Base, Idris Elba join forces to celebrate Africa Day. AKA withdraws from Joburg Day event and other public appearances. »
back to top