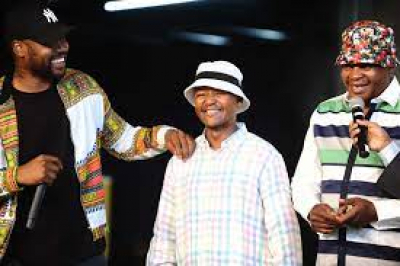 Matsane passed away after he was involved in a car accident in the early hours of Sunday, 23 May 2021.

The statement from Kalawa Jazmee Recording, where he was co-director, said Matsane had been traveling from a performance with the group.

'Mjokes' or 'Copperhead' as he was known in the Kwaito world - had been in the music industry for over two decades and performed various genres of music including Afro Pop and House.

A memorial service for Matsane was held on Thursday, 27 May 2021 at the Bassline.

Radio DJ, Thato 'Fresh' Sikwane was one of the speakers featured in a video of tributes from fellow artists and industry players.

"The world is not a better place without you, the industry is not better off without you. May you rest in peace, Mfana. I think you made your mark, and it's sad that you had to leave us so abruptly but your legacy is what will keep you alive for another 100 to 500 years. Rest in peace, Mjokes. "

In his tribute, Trompies member, Eugene 'Donald Duck' Mthethwa said: "It is indeed a very sad reality that we are faced with, a very painful experience, but I would say that at least you spent your last moments with us. You were a gift to Trompies and you will remain one...It is a 'goodnight' from us, but I am sure and certain that we shall meet. We shall remember you in a very good way."

Matsane was the director and co-founder at Kalawa Jazmee records and the lead vocalist of the renowned kwaito group Trompies.

After completing matric, he studied classical music and jazz at at Madimba Institution of African Music.

His musical career started off with him working as a sound engineer in studios in downtown Joburg, before pursuing his solo career as "Copperhead".

He released a few solo albums namely "Dogy Style", "Ngal-le way", "Talk of the Town" and "Cultural House", along with a few hit singles such as "Take You Out" and "Ama-Ben 40".

Twitter
More in this category: « New book by Nthikeng Mohlele announced! (PLUS new edition of Small Things). SAMA 2021 unveils new category Artist of the Year. »
back to top