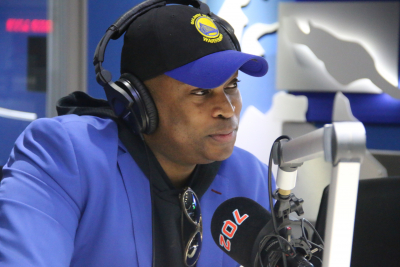 Broadcaster Robert Marawa has revealed that he battled Covid-19 for three weeks.

Marawa has been off air for several weeks but his recovery has been so encouraging that he could be back on radio on Monday to present his Marawa Sport Worldwide, which is simulcast on both Radio 2000 and Metro FM.

"It is with great gratitude that I still find myself alive and able to address this personal matter publicly.

"As a broadcaster within the media space‚ I wrestled with the thought of sharing this part of my journey publicly‚ however‚ I also came to realise that my reality could help educate and perhaps even save someone’s life‚" he said.

"I’d like to start by first thanking my family‚ close friends and my wonderful fans who have showed great concern since my absence from radio and social media in the past few weeks.

"I was recently diagnosed positive with Covid-19 and started strict self-isolation‚ while not taking any medically prescribed pharmaceutical medication.

"What started out as the flu-like symptoms we’ve all been warned about‚ quickly led to fulminant debilitating inexplicable fatigue without shortness of breath on day eight of my diagnosis.

"A doctor friend advised me to get the electronic device that measures pulse and blood oxygen concentration.

Marawa said it was at this stage that he was sent to the ICU.

"I was observed in the general ward for a further 2 days before I was discharged to go home‚" he continued.

"The medical professionals working tirelessly to revive my health concluded that the extensive level of Covid-19 pneumonia that I had developed could have resulted in a far worse experience had I not sought medical intervention as soon as I did.

"Thus it’s extremely important that one seeks medical attention as soon as possible instead of isolating at home while the symptoms continue to intensify."

Twitter
More in this category: « Livestream:Veteran actress Shaleen Surtie-Richards will be laid to rest. Watch: First trailer drops of Babes Wodumo and Mampintsha in 'Uthando Lodumo'. »
back to top