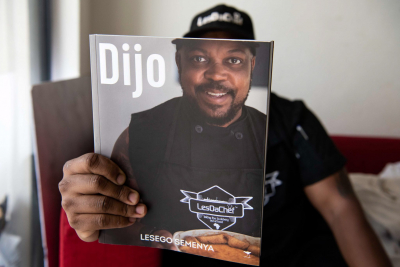 In a tweet on Monday afternoon, the family revealed that the beloved chef had passed away. He was 39.

It is with great pain that I have to share this: Chef Lesego Semenya @LesDaChef has passed away. Please keep his family and friends in your thoughts. We have lost a huge part of our heart. We will never be whole again. R.I.P Lesego pic.twitter.com/dhr6Khfd5n

Though the cause of death is yet to be revealed, Lesego had tested positive for the Covid-19 earlier this month and was updating his followers on his journey to recovery.

The Soweto-born chef had earlier revealed that he was living with a comorbidity, which made his fight against the virus more difficult.

His last update on his recovery posted on Twitter was a record of day five, on which he told his followers that he was taking loads of medication and thanked everyone for the support he had received since testing positive.

Day 5. Still fighting this Covid demon whilst living with a comorbidity. I'm OK, loads of medication and keeping positive. Thank you to those who keep checking up on me. Dr reckons I've seen the worst of it now and it's just about recovery and rest now. ♥️??

He was a celebrated and award-winning chef who released his first cookbook, titled Dijo: My Food, My Journey', in 2018.

Semenya was born and raised in Soweto. Whilst still working as a process engineer for The IQ Business Group he decided to pursue his personal passion and goals.

He began writing articles for a youth magazine called UnCut, the flagship magazine for an organisation called LoveLife. He left the corporate world in 2008 after 6 years to pursue his business goals. Lesego then went on to travel South Africa for a year before enrolling at South Africa’s best chef school, Prue Leith Chef's Academy in Centurion, to study towards becoming a chef. He qualified with a Grande Diploma in Food and Wine and 5 other international level diplomas in wine and patisserie.

He has subsequently gone on to work at The Westcliff under renowned chef Nicky Gibbs. In 2010 he took part in a World Cup pie designing competition run by the British High Commission where his pie, based on a township Kota, won and was named the Official pie of the visiting British football fans for the 2010 FIFA World Cup. The prize included working in a Michelin Star rated restaurant in London owned by Richard Corrigan.

Lesego has gone on to work as a personal chef for a renowned family in Irene, catered to Howard Buffett (Warren Buffett's son) annually, catered to The British High Commission as well as Liverpool FC. He has also catered to numerous South African celebrities as well as renowned international celebrities.