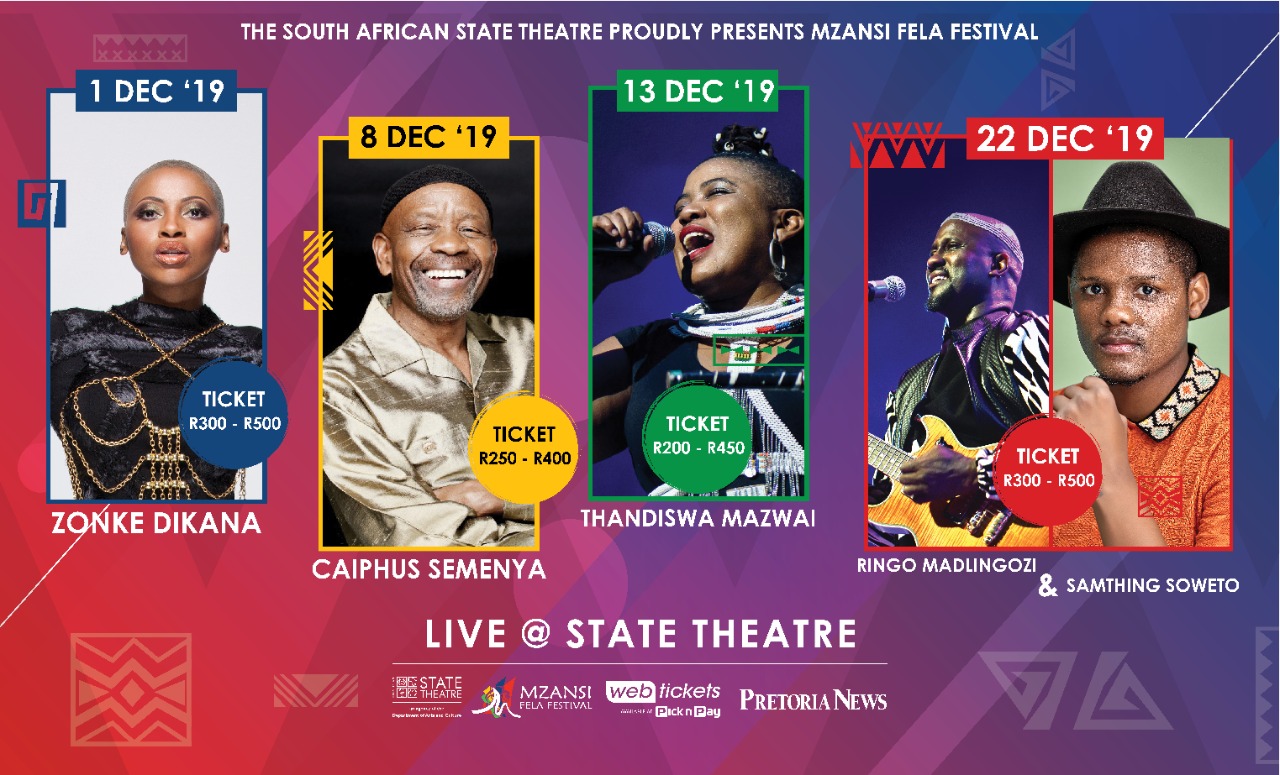 Following an eventful media preview of Mzansi Fela festival held on Wednesday, 20 November 2019, at the South African State Theatre, the theatre is excited to share with the public that it is all systems go for the much awaited 12th edition of the festival scheduled to run from 01 to 22 December 2019.

Since its inception in 2007, Mzansi Fela has become one of the most anticipated festivals of the year in the Tshwane Metropolitan and Gauteng province, if not the country at large. Mzansi Fela -as the name suggests, “South Africa only”- is a premier artistic platform for domestic artists to showcase their talents. The idea behind its establishment was and still is to encourage and celebrate the creation of South African works and uplifting the country’s arts landscape. Annually, it lines up the most exciting feast of music, theatre, dance, comedy and poetry in Mzansi.

Unveiling the festival’s programme at the gathering, Artistic Director of SAST Mr Aubrey Sekhabi paid homage to Ntate Caiphus Semenya on his 80 years’ birthday. “We are privileged to experience your craft, to see you still walk on stage at 80 and give a performance like no other. This offering on Mzansi will be no different and it is indeed a blessing to have him in the programme.”

Ntate Semenya will be headlining the festival with the country’s musical powerhouses including Zonke Dikana, Thandiswa Mazwai, Ringo Madlingozi and Samthing Soweto on various dates. Joining the music concerts line-up is Dr Sello Galane with his 4th Annual Pula Festival on 07 December- the same night of Simphiwe Dana’s Symphony Experience. Tickets of these concerts are still selling from R200 on Web tickets.

Added to the list of tribute presentations, it’s there naming of one of the theatre’s auditoriums after the late Dr Phillip Tabane and hosting his memorial lecture, Sekhabi announced. The lecture will encompass‘A historical analytical study of Malombo music of South Africa,’ and it will be presented by Dr Sello Galane on 11 December.

At the media preview, members of the media were treated with glimpses from the headline offering KWANELE, performed by musicians Bonafide Billi and McKenzie Matome, which is set to run from 01 to 15 December 2019. The new production is commissioned by the department of Arts and Culture in reaction to the recent xenophobic attacks and gender-based violence in our country. On stage was also a performance art piece titled Flesh Light, which is part of the 16 Days Theatre Activism Against GBV, created by award winning writer and director Joseph Komani. The piece uses burnt umbrellas to project how most women feel walking in public spaces.

Guinness World Record setter for producing the largest artwork using coffee granules, visual artist Percy Maimela will be exhibiting from 01 to 07 December at the festival. The 34-year-old is one of State Theatre's Incubator Programme graduates who are making a mark in the art scene. This exhibition is set to celebrate his achievement.  The 2019/2020 season of the Incubator Programme is yet to kick-off this December with a performance by poet Matome Rampedi, whose poetry showcase, Poetry Church on 07 & 08 December, will be taking on the rise of self-enriching pastors in ‘THE NEW SATAFLIKA.’  Thabiso Mfana, winner of the 6th UNISA piano competition in the jazz category, presents 12 daring original compositions on 14 and 15 December under the programme.

As a culmination of artistic events in the calendar year, the theatre aspect of Mzansi Fela centres around South African theatre through our Community Arts Dramaturgy Outreach Programme (CADO). CADO, which is a two-year programme with the first year focusing solely on South African classics, remains an important platform for amateur writers, directors and performers. This year, being the second and final year, the community groups will be presenting original works from 01-13 December. “CADO has been a strong feed for tertiary institutions like TUT and UP. SAST remains a major platform for young artists and technicians alike,” Sekhabi said.

The CEO of SAST Dr Sibongiseni Mkhize added that“Mzansi Fela Festival is testament to the theatre’s commitment to become a theatre of choice for a distinctly pan-African experience. The exciting range of music concerts and theatre offerings pay a fitting tribute to South Africa’s artistic excellence. “We are delighted that once again the artists and all our stakeholders have agreed to partner with us to deliver what is promising to be another world class festival. ”

More in this category: « Simphiwe Dana presents a symphony for African unity. Trevor Noah has received a Grammy nomination for the best comedy album at the 62nd Grammy Awards. »
back to top