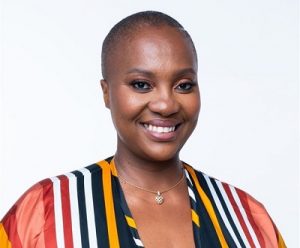 Dr Van Zyl was born in Harare, Zimbabwe. She attended the University of Pretoria where she obtained a BSc in human physiology and psychology, and a Bachelor of Medicine, Bachelor of Surgery degree. She interned at Chris Hani Baragwanath Hospital. She uses Twitter, mainly, to inform and engage about HIV particularly Prevention of mother to child transmission. She shares about her personal journey with depression.

Dr. Sindi is the new host of the 7 – 8 PM night-time talk show on Kayafm,She took over from Mapaseka Mokwele: Sidebar with Sindi. While Dr. Sindi is known for her work as a medical doctor, her show explore multiple facets of her vibrant personality with the overarching theme of family.

Dr. Sindi, as she is affectionately known, has passionately shared her thoughts on important issues including; HIV – especially the Prevention-of-Mother-To-Child-Transmission, mental health, as well as constantly busting medical myths. Dr. Sindi has also picked up a number of accolades including the highly- coveted Glamour Magazine Women of the Year Award in the health category (2018).

In a statement from the station, she shared her excitement at the news saying in part; “I am very excited to be joining the Kaya family. I have always been an Afropolitan and this is a dream come true for me. I am also looking forward to winning over new people from different backgrounds with the show."

Sidebar with Sindi is about having and facilitating empowering, insightful and inclusive conversations between listeners and subject experts for lasting and holistic impact on those who participate in the conversations without fear of judgement.

Chief Content Officer, Neil Johnson expressed, “It is a great privilege to have Dr. Sindi joining the team. Her background in medicine will bring much-needed insights and traction from a new audience, which will help us understand how best to service that market.”.

As a seasoned medical practitioner ,Dr Sindi van Zyl has amassed a huge following both on and offline, opening up her social media platform as a space for her followers to engage with her on a range of medical and social topics.

Tweet
More in this category: « Moeti "Moflava" Tsiki moves to the breakfast slot at Metrofm Happy International Beer Day 2019 »
back to top