The life and struggles of Artist Zanele Mashinini. 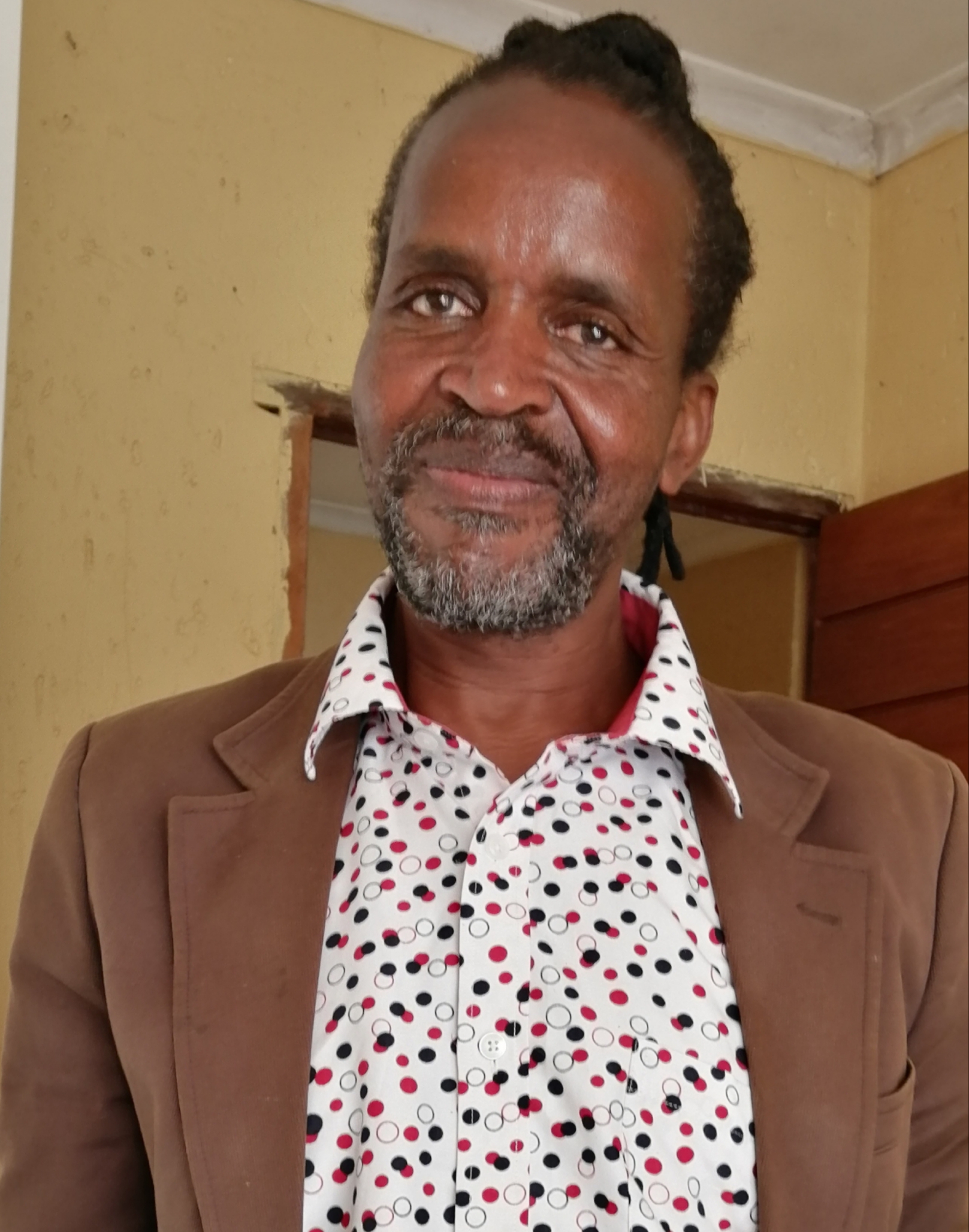 One of the truisms coined by the old Anti-Apartheid Movement is that there can be no normal life in the context of an abnormal society. It is also true that artistic endeavour can only flourish when it is part of a struggle against adversity, against the symbols of an oppressive ideology, and against the actions of a fascist regime, one that sets out to imprison its citizens inside a web of totalitarian laws which limit their thoughts and actions. It is only when inspired by a real need to achieve freedom that an art of Freedom can be achieved, for no art of any meaning has ever achieved freedom from the confines of a polite salon, from a contented and self-satisfied society raised on “braaivleis, sunny skies and Chevrolets”.

The international youth culture of the 1970s railed against this when it prayed for “a night on the town, a Mercedes Benz, and a colour TV”, and when its anthems proclaimed that “we’ve gotta get out of this place” before we become “just another brick in the wall”. South Africans suffering under the yoke of Apartheid had different Freedom songs, anthems that rose out of the “townships”, out of broken families divided by a heartless migrant labour system, out of the starvation camps of Dimbaza and Kromdraai, out of our young people in exile in Tanzania and Angola, out of our leaders on the Island, and out of the misery of the many mixed-race lovers who loved unwisely.

Orlando was such a place, born out of the demolition of homes legitimately built at Sophiatown, whose residents were resettled at gunpoint by the police in tents in the bare veld, with the bitterly cold winds of a Highveld winter sweeping about them. Orlando thus became the new home of musicians and poets,of writers and artists and dancers and singers, of the Matteras and Sekotos of a new South Africa that was struggling to survive against the onslaught of fascist politicians and stony-faced government officials. And it was here that Zanele Mashinini was born and raised.

It was here that, at the tender age of three he began sketching on scraps of paper, encouraged by a mother who, at, every possible occasion, impressed upon him that to every birth there is a certain mission to be undertaken.  In the same breath his mother, MaMoloi, was laying down a foundation for the young child to understand that to accomplish certain purposes in life one needed to connect with them to their fullest core. In consequence, it is important to embrace ones talents wholeheartedly in order to reach greater heights.  Mashinini senior on the other hand, liked to joke that his son knew how to mix colour schemes long before he could actually see the rainbow.

Interestingly enough though, it was Zanele's mother who, later on in life, encouraged her son to follow his dreams and to enrol in an arts training programme which led him to achieve many firsts. It should be noted that, during the dark days of segregation, Zanele entered formal art education at a time when the field of visual arts was not attracting as many young artists to its ranks as it does today.  At the time the Black community already had its fair share of noted artists, whose work was finding national and overseas recognition.

These artists had already conquered the world and had etched their names in the international annals of art history, but under the Apartheid system were anomalies which fell outside the illiterate bounds of segregated labour. As a result these giants were hounded by the Security Police, who kept them under constant surveillance and, because of their progressive political views, labelled them as “subversive troublemakers or terrorists."  Consequently, many of them were induced to seek the more liberal airs of Paris, London and New York, where their talents were better accepted, and even admired.

Such artists had to create alternative avenues for their voices to be heard, and Zanele was exposed

to the works of legendary visual artists such as Gerald Sekoto, Louis Maqhubela, Fikile Magadlela,

Thamsanqa Mnyele, Dumile Feni, Lefifi Tladi, Pitika Ntuli, Ernest Mancoba and Louis Maqhubela to name just a few.  Thanks to publications such as The Voice, Staff Rider and a host of other alternative media which gave a voice to the marginalized masses, Zanele came to realize that artists were also opinion makers.  As a consequence of his love for the arts, Zanele also got exposed to the “Black Jesus”, a “controversial” painting created by Ronald Harrison who was then teaching at King Edwards VII School, and taught a number of young artists who became influential in their time. As a result a number of White artists and architects such Franco Frescura and Gavin Young who also played a part in the anti-Apartheid movement, unknowingly because contemporaries of the young Zanele.

A visit to the Wits Department of Architecture brought him into contact with Professor Amacio d'Alpoim Miranda Guedes, better known as Pancho, and his son Gordofrido Guedes both of whom took an interest in the young artist. Pancho presented Zanele with a book of graphics done by his son, which proved to be greatly influential upon his linear drawings.

Conscious cultural activism introduced more and more youngsters to the visual arts as a medium of political expression. At the time, in 1976, this project aimed at providing an education for youngsters who were not attending school due to the upheavals in their streets.  In those heydays the seed for the arts was sprouting, especially at a time when the late Matsemela Manaka and his comrades were giving their time in order to nurture youngsters through the idioms of artistic expression.

As he began to mature as an artist in his own right, his grandmother took Zanele to an artist in Orlando West, Basil Baqwa. Basil was already an established and working artist who brushed shoulders with some of the famous artists such as Fikile Magadlela, Cyril Khumalo, Percy Sedumedi, and others. The young Zanele was given some lessons by Basil which gave him enough ammunition to navigate on his own.  It was Zanele's elder brother Sibusiso Saul Mashinini (a.k.a Minus) who would tease and lampoon his images. He would laugh at whatever attempt he made to reconfigure in his drawings. Little did Minus realise that his criticism became the building blocks to inspire Zanele and make him an exceptional craftsman. It was Minus who later heaped praise on the powerful antiapartheid graphics that Zanele was producing.

Zanele’s first commercial break came in 1996 when his graphic work came to the notice of the South African Post office. As a result he was commissioned to design a stamp celebrating the 1996 Africa Cup of Nations, in the process becoming the first Black South African to receive such an honour, and breaking a social barrier which had stood for 86 years.  Other honours were soon to follow. His alma mater, Orlando High School inducted his name onto its Alumni Roll of Honour, whose top hundred names feature some of South African most prominent luminaries drawn from such diverse field as media, medicine, sport, science, education, engineering, arts, culture, and politics. This Roll now graces the wall of his former school, an inspiration to new generations of aspiring scholars and athletes.

Next, the Sofasonke Mpanza Legacy Foundation, which pioneered the initiative, honoured Zanele for his outstanding role as a community builder, for his outstanding achievements in the arts and culture, and for his contribution to building sustainable communities locally and internationally.

The seminal "Africa We Care" icon created by Zanele, is ranked by Google amongst the fourteen globally most used HIV and AIDS education logos.  Many of his linear artworks drawn during the 1980s were used as protest banners during the anti-Apartheid campaigns. Trained as a visual artist, photojournalist, event organiser, graphic artist, creative writer, cinematographer and cartoonist, Zanele has always had his heart on the ground working for the betterment of his community. He has decades of experience having worked within grassroots organizations as well as government and health sectors.

In 1993 Zanele was granted permission by the nearly-defunct Nationalist Party government to take photographs on Robben Island as part of a photographic essay. The resultant exhibition was held in Cape Town and at the UNESCO offices in Paris.  Also an avid reader, he literally devoured all sorts of texts, from both fact and fiction. He was a frequent visitor to the United States Information Services (USIS) library located at the Donaldson Community Centre, popularly known to its visitors as DOCC.

He familiarised himself with a wide range of subjects from African American literature, politics, philosophy, music, dance, cinematography, poetry, theatre, creative writing, storytelling, dramatic arts, photography, and crafts. The doyen of township theatre, Bra Gibson Kente, trained artists only a stone’s throw away from his home and became a great source of inspiration. This further enhanced interest for the versatile multi talented artist to explore his talents. Zanele's literary highlights include writing the lyrics for the “Vuka Africa” single, which featured more than three hundred eminent South African artists.

In addition Zanele is a founder member of African Musicians against HIV/AIDS (AMAHA), was Project Manager for Arts for Life, and Business Development Manager in a publishing outfit. He is presently a Board Member of Ubuntu at Phansi Museum. The “Mother of all Mothers” artwork is a piece donated to Ubuntu Phansi Museum for its outreach projects. The proceeds will benefit predominantly women crafters in need of setting up sustainable businesses.

Today Zanele’s work is guided by a simple philosophy.  “My art is mainly influenced by the Spirits. I therefore, am a voice that will never be silenced because I need no validation. My work flows from places I don't know.  If others carry guns to challenge the diabolic status quo.  I carry a more potent armoury: my ART”.

More in this category: « SA’s top sports journalists awarded at SAB Sports Media Awards. How To Steal A Country - A film by Rehad Desai. »
back to top