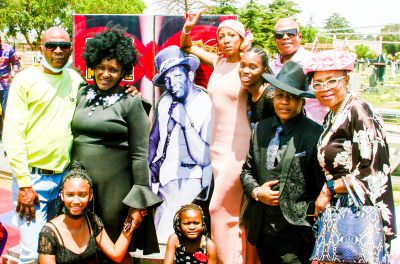 The spring Sunday of November 7, 2021 witnessed family, protégés and associates rendezvous at Soweto’s Uncle Tom’s Hall for the tombstone unveiling of the doyen of Black South African theatre, Gibson Kente – seventeen years after his passing on the very same day in 2004.

Organized by one of the playwright’s progeny, Nonzophi Kente, as well as an array of artists under the umbrella of Together Folks Arts Practitioners, ‘twas a befitting occasion filled with vaudeville, pomp, razzmatazz complemented by attendees dressed up in 60’s outfits of bellbottom pants, Afro wigs Dobbs fedoras, chivalrous cravats, dancehall polka-dot dresses and airs of antiquity and nostalgia! 'Twas the sort of event where Harlem Renaissance wordsmith, Langston Hughes' literary imagination crossed swords with that of Sophiatown-era man-about-town, Don Zinga Mattera’s colourful Scamto recitals! A moment in time, to borrow Hughes, where "he could take Harlem’s night and heartbeat to make a drumbeat” and Mattera would dare “n kleva om hom ses stukkies te sny" (a streetwise fellow to cut him six pieces)!

Hulle was daar (they were there), as Mattera would observe in his Afrikaans tinged grammar – die main ouens en cherries (smart guys and ladies), from author, Sol Rachilo (who let slip that he had walked 2 hours and 20 minutes from his abode in Mapetla to Orlando West, just to indulge in the occasion), Kid Mabutho Sithole, poet, Mzwakhe Mbuli, actors, Jerry Mofokeng wa Makhetha, Don Mlangeni Nawa, Darlington Michaels (his fingers all covered in rings a la The A-Team’s Mr T), Patrick Shai, as well as Linda Sebezo, Nomsa Xaba and songstress, Abigail Khubeka (an epitome of elegance in black designer dress, sunglasses and facemask), among a phalanx of stage, television and film celebrities! This auspicious rendezvous, unfolding inside a venue aptly dedicated in honour of the late East Londoner (a Gauteng Provincial government plaque unveiled by then MEC for Sport, Recreation, Arts and Culture, Barbara Creecy, in November 7, 2005, greeted visitors at the hall’s entrance).

Also gracing the stylish gathering were protégés of Kente’s who refer to themselves as Bonono Actors, namely, Peter Mashigo, Nozipho Bless, Titane Zwane-Mthetwa, Mpho Chief Siboa, Kholofelo 'Skroef' Kola, Dieketseng Mnisi and Susan Theletsane. Most now middle-aged, they started out in theatre from youth harking back to the late 70s of plays such as, Things Are Bad Mzala.

Of a programme divided in three parts, and be that as it may that it was an occasion in celebration of the Duncan Village-born thespian’s contribution to the arts – contemporary practitioners lined up to speak didn’t hold back with their scathing criticism of the State’s lack of support for the arts. The programme director, Sayitsheni Mdakhi weighed in: "A wise man once said a government that doesn’t take care of its arts sector, neglects the soul of the nation." Neither did family representative, Themsi Kela, duly observing wryly: "If artists could contribute to a tombstone 17
years after Bra Gib’s passing – where are the politicians?" Chimed in renown actor, Jerry Mofokeng wa Makhetha, "Let’s keep the rights of Bra Gib’s work in the right place!" Whilst another of the scheduled speakers, fellow actor, Patrick Shai, called for a Gibson Kente Festival.

The initial segment of the programme was as lively as could be mastered, with populist poet, Mzwakhe Mbuli firing up the early morning proceedings with one of his typically electrifying poems – which sent applause reverberating across the elegantly decorated hall adorned with freshly arranged flowers placed on rows of long dining tables. A band enthusiastically gave intermittent renditions of soundtracks from the heydays of Kente’s so-called Township Theatre – whilst a troupe known as the Gibson Kente Cast performed dances and brief plays.

Present too, were Kente’s widow, Patience (described by a speaker as the love of his life), his children, Daisy Tlhapane, Sabelo Kente, Vuyo Jacobs Kente (a fashion designer who wore a creation of hers inspired by Diana Ross) – as well as numerous nieces and nephews. The matriarch got a standing ovation upon being introduced.

Part two of the day’s schedule unfolded at the Roodepoort cemetery where the programme director opportunistically played to the gallery by pointing out that most of the occasion was put together by Black empowerment – mentioning that Khaabo Tombstones sponsored the tombstone, B3 funeral services transported the family as well as provided requisite support at the gravesite. A family member assigned to give the vote of thanks acknowledged other sponsors such as, Kwa-Lichaba for food, SAB for liquor beverages and a plethora of other entities (whose names appeared on the programme) which combined to making the occasion memorable.

The tombstone itself is an impressive creation (the work of graphic artist, Vusi Mahlangu) carved out of marble and dominated by a monochromatic image of the late composer/director/producer depicted sitting by a piano, donning a Panama hat whilst gazing contemplatively at the camera. Inscribed in gold against a red curtain is the declaration: The Great Gibson Kente. Other areas around the stone encapsulate Kente’s contributions to the country’s arts - mentioning that his plays politically shocked the White dominated arts industry.

Back at Uncle Tom’s Hall for the final segment of proceedings – attendees feasted on Sunday’s vaunted 7-colours whilst being entertained by Struggle-era music from the band on the overlooking stage, as well as performances from a delightful lineup of other acts. In response to what the organizing artists had done in her husband’s memory, Patience Kente gushed magnanimity: "I just feel on top of this world!" "I’m grateful with all of my heart for this great occasion – I didn’t expect this!" Catching up with Kente’s stylish daughter, Vuyo, she intoned: "We are happy that he’s honoured," whilst adding that, "it’s neither here nor there” that it’s taken so long to erect a tombstone in her father’s memory.

'It was a sunny Sunday, to borrow Langston Hughes yet again, when Harlem (in this instance, Soweto) had its washed and ironed and cleaned best out!An occasion where ouens had their soup-n-fish (black &amp; white) brogues out for a jol!