The Wife tops Twitter trends chart in SA as it launches on Showmax. 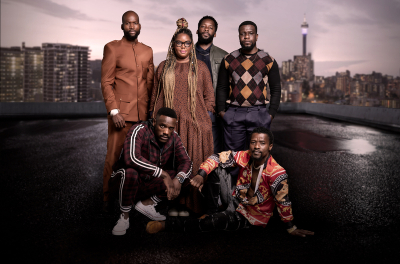 The Wife topped the Twitter trends chart in South Africa by 6:30am this morning, with fans waking up early to devour the first three episodes of the debut Showmax Original telenovela as they dropped. It's already at #1 on Showmax's Top 20, ahead of Emmy winner Succession.

Inspired by Dudu Busani-Dube's bestseller Hlomu The Wife, the 40-episode first season tells the story of a journalist (Mbalenhle Mavimbela from Skeem Saam and House of Zwide) who falls in love with a taxi driver, Mqhele, not realising that when you marry a man, you marry his secrets.

Early reviews are glowing. Daily Vox's Ling Shepherd gave The Wife 10/10, saying, "It is a wild taxi ride and we want more." TVMzansi raves, "The Wife adds a new dimension to black love. It's so inspiring to see such a compelling work of art presented in such a way that we all relate to. The talent, the production quality, the music and the story is just incredible!"

"It's been a crazy morning," says Dudu. "People are telling me they've already watched the episodes more than twice and I'm like...this is the most amazing thing I have ever seen. Stained Glass outdid itself here. My people are happy; they love the adaptation."

Dudu raved about the casting of rising star Bonko Khoza (Necktie Youth, Roots) as Mqhele. "Everybody loves him," she says. "He fits the description. He has the face. He understands the character. So, yeah, I'm happy. I'm relieved."

Bonko says that fans of the book shouldn't think they know what's going to happen in the telenovela. "Fans can look forward to seeing the Hlomu The Wife that they know and love, but expanded and more colourful. It's come to life in ways that even surprised us as actors and fans who've read and loved the book. For an example, in the book, most of the time you don't know where Mqhele goes. When he leaves the house, you're always seeing it from Hlomu's perspective, like he's not coming home. But now in the series, you get to see where he is, you get to see what he's getting up to. You're going to see the crime. That dark underworld that we suspect in the book, you're really going to get to be a part of in the series, that dark world that Hlomu is so afraid of."

He says Mqhele's relationship with Hlomu remains the centre of the story, though. "It's been so much fun working with Mbalenhle; she's an amazing actress," he says. "The chemistry has been great."

He took a method acting approach to the role - "where you are living in the character for a period of time..." He explains: "It's quite a niche world, the taxi industry. You can't half-arse something that's so specific. So for about a month or so, I spent a lot of time at the taxi rank and played a lot of guitar and smoked a lot. I bought my own prop gun and carried it on me to see how that feels. I woke up at about three a.m. and just kept myself busy and got home very late and got to bed very late, so that I could feel Mqhele's tiredness."

He acknowledges the unprecedented debate that met the casting of those eight sexy skebengas, the Zulu brothers. "There is a huge following for the book series. You could tell that when the show got announced and everyone had their own cast. I was like, 'Okay, this book is big, right?' And I don't blame the readers for having their own imagination, because that's what a book really does, right? A book engages your imagination. So it's totally understandable that everyone had imagined their own story or how it played out, and everyone's imagination is totally valid. In fact, even after the series, whatever Mqhele or Nkosana that you saw is still valid. We're not here to nullify your imagination or say that you're wrong? No."

Instead, he calls the telenovela "a whole other beast... that expands the story into a different medium, which means it's going to need a whole bunch of new elements."

While it was never going to be possible to find eight identical, bug-eyed Zulu brothers, as described in the book, Bonko believes they're perfectly cast. "Not in the sense of looks but just in terms of energy - and that's really something hard to get right. We all gel. We all respect each other, and we're all willing to help each other to get to wherever the one needs to get to for the scene or for the work, and to be there for each other outside of the work. We have formed a really powerful bond. We spend most weekends together; we look out for each other. My big brother Nkosana, Mondli Makhoba, is really a big brother to me. Kwenzo, Sipho, Abdul, Thulane, Ishmauel and Swelihle, they are like real brothers to me."

He can't wait for fans to finally see the show and fall in love with the beloved characters all over again, in new ways. "I don't think SA has seen anything like this; I don't think they've made anything like this before. It looks beautiful, man. So Mzansi just has to strap on a seat belt and hold tight. It's going to be a crazy trip."

Showmax has commissioned three seasons of 40 episodes each, inspired by Dudu's books Hlomu the Wife, Zandile the Resolute, and Naledi His Love respectively. The books follow the lives of the eight Zulu brothers, a formidable crime family, through the eyes of the wives they marry.

More in this category: « Barakat selected as SA's official Oscar 2022 submission. The Wife breaks records on Showmax, beating Uthando Lodumo and Devilsdorp. »
back to top