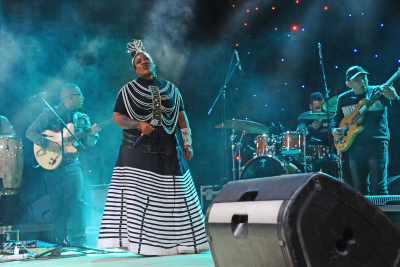 South African musicians Vusi Mahlasela and Thandiswa Mazwai will be honoured with the 2021 Music In Africa Honorary Award at the opening of the Music In Africa Conference for Collaborations, Exchange and Showcases (ACCES) in Johannesburg, South Africa, on 25 November.

The award is courtesy of the Music In Africa Foundation and seeks to recognise the outstanding contributions of notable musicians to their home country's industry and that of Africa as a whole.

"We are delighted to present the Music In Africa Honorary Award to South African music legends Vusi Mahlasela and Thandiswa Mazwai", Music In Africa Foundation chairperson Yusuf Manhoud said. "These artists are some of the most important flagbearers for African music, and their work to popularise African music around the world should be celebrated by all. We want to thank them for inspiring the next generation of creative talent in South Africa and across the continent."

Born in Pretoria in 1965, Mahlasela became an inspiration to many supporters of the anti-apartheid movement by singing about the struggle for freedom, forgiveness and reconciliation. He gained international recognition in 1990 when he played at Zabalaza Festival in London and dedicated his debut album When You Come Back to those who sacrificed their lives during the struggle. Mahlasela has committed his life to singing songs about freedom, social justice and unity. In 2013, he was honoured with the National Order of Ikhamanga in Silver. The order is conferred on South African citizens who have excelled in the fields of art, culture, literature, music, journalism and sport.

Born in 1976, Mazwai began her career with a popular music group Bongo Maffin. While with the award-winning group, she performed all over the world and shared the stage with music icons like Stevie Wonder,Ladysmith Black Mambazo and Chaka Khan. Following five albums with Bongo Maffin, Mazwai launched a successful solo career in 2004 with her debut album Zabalaza, which went double platinum and was nominated at the BBC Radio 3's Planet Awards. Her music is often deeply political with compositions that include traditional Xhosa rhythms, mbaqanga, reggae, kwaito, funk and jazz. Her craft has earned her collaborations with various artists including Paul Simon, Hugh Masekela, Stimela and Busi Mhlongo.

Registration for ACCES 2021 is mandatory and on a first-come, first-served basis. African delegates register for free.