How To Steal A Country - A film by Rehad Desai. 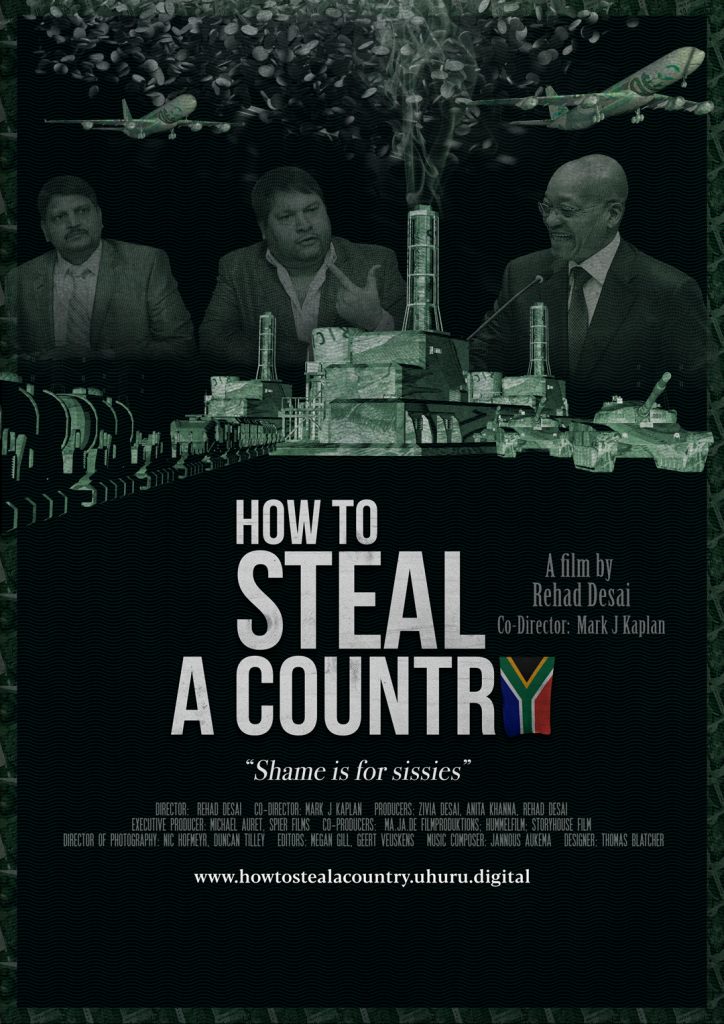 This is the story of the Gupta family’s spectacular rise from flea market shoe salesmen to establishing a massive black owned business empire in South Africa. It runs as a suspenseful detective story uncovering one huge bribery scandal after another, involving the top echelons of political power and several well-known multinational corporations.

Our story begins by showing how the three Gupta brothers ensconce themselves with President Jacob Zuma, allowing them within 10 years of arriving from India to become multi-millionaires, primarily through lucrative state contracts.  They then buy an uranium mine, attracting the attention of British and US intelligence agencies. Next, the finance minister is fired, which we reveal is over his refusal to sign an irregular nuclear deal with Russia and several leading political figures go public, describing how the Gupta’s are directing critical government affairs. There’s a flurry of fake news, dodgy intelligence reports and attacks on journalists, in defence of ‘radical economic transformation’.

When a second ‘uncooperative’ finance minister is fired, his speech on the steps of the Treasury is the first time a senior member of the ANC appeals to the public to defend South Africa’s hard won democracy.

Then come the #GuptaLeaks, a trove of over 300,000 emails and documents akin to the Panama Papers, laying bare the modus operandi of the Guptas and their associates, more dangerous than anyone could have imagined. Taking us from one family, to a president, to a captured state, to the central role of unscrupulous multinationals, the escalating layers of this story unfold like a Shakespearean tragedy that will hold up a mirror to many countries facing similar circumstances today.

Rehad Desai is a Producer/Director who runs his own company Uhuru Productions. Following his return from political exile in the UK Rehad worked as a trade union organiser, a health and safety/media officer for a chemical workers union and a Director of a HIV prevention NGO. In 1997 he completed his Masters Degree in Social History at the University of the Witwatersrand. Rehad then entered the TV and film industry as a current affairs journalist, and soon after moved on to focus his energy on historical and socio -political documentary film.

In 2009 he completed a post graduate diploma in documentary through Eurodoc. He has produced over 20 documentaries, many directed by himself that have been broadcast internationally, accepted into numerous festivals and been received with critical acclaim. His last film Miners Shot Down has won local and international critical acclaim garnering over 25 prizes including the Taco Keiper award for investigative journalism and an International Emmy for best documentary. He is also a well known social justice activist that chairs the Human Rights Media Trust and the South Africa Screen Federation.

More in this category: « The life and struggles of Artist Zanele Mashinini. Marie Fredriksson of Roxette has died at the age 61. »
back to top