The farewell in celebration of jazz master Barney Rachabane. 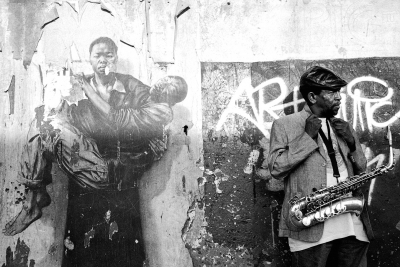 A gray late South African spring Saturday of November 20, 2021 saw the usual suspects of the country’s music existence descending on the Soweto neighbourhood of Pimville to bid their farewell to a diminutive soul Paul Simon once described as "one of the most soulful saxophone players in the world – one of the best I have ever played with!", namely, Barney "Bambo" Rachabane.

Under brewing clouds flirting with a predicted rainstorm and under a long-stretched marquee erected on a street in front of the family’s face brick house, the crème de la crème gathered from across the provinces of the African continent’s southerly-lying republic. A rendezvous of names familiar to the tongue of local music’s lexicon: Fitzroy Ngcukana, McCoy Mrubata, Marcus Wyatt, Khaya Mahlangu, Menyatso Mathole, Greg Francis, Mandla Mlangeni, Bucco Xaba, Jessie Mogale and even the recently departed saxophonist’s insanely talented grandson (and fellow saxophonist), Oscar!

Although funerals by their context are somber and sad affairs, those bidding adios to musicians always, sans fail, tend to drift along the celebratory lane - and Rachabane’s was no different, as also hinted on the collector-item programme titled: Celebration of Life.

Thus then, a celebration it was in reverence of the admirable legacy of a curious Alexandra-born son of a bus driver (and pianist, on the side) cat who at the age of seven formed a band of penny whistlers named, Alexander Junior All Stars - who played on the Dark City’s street corners - and by the age of 18, had progressed on his self-taught vocation sufficiently to stand-in for Kippie Moeketsi as part of a quartet which performed at the Castle Lager Jazz Festival, in 1964.

One of the dudes Rachabane’s sax playing made an impression on was fellow saxophonist, Khaya Mahlangu - who played as part of an impromptu quartet directed by young Mandla Mlangeni at the funeral - and informed mourners that the late reedman’s performance at that 1964 gig "had such a profound effect by a South African" upon his then 10-year old self! 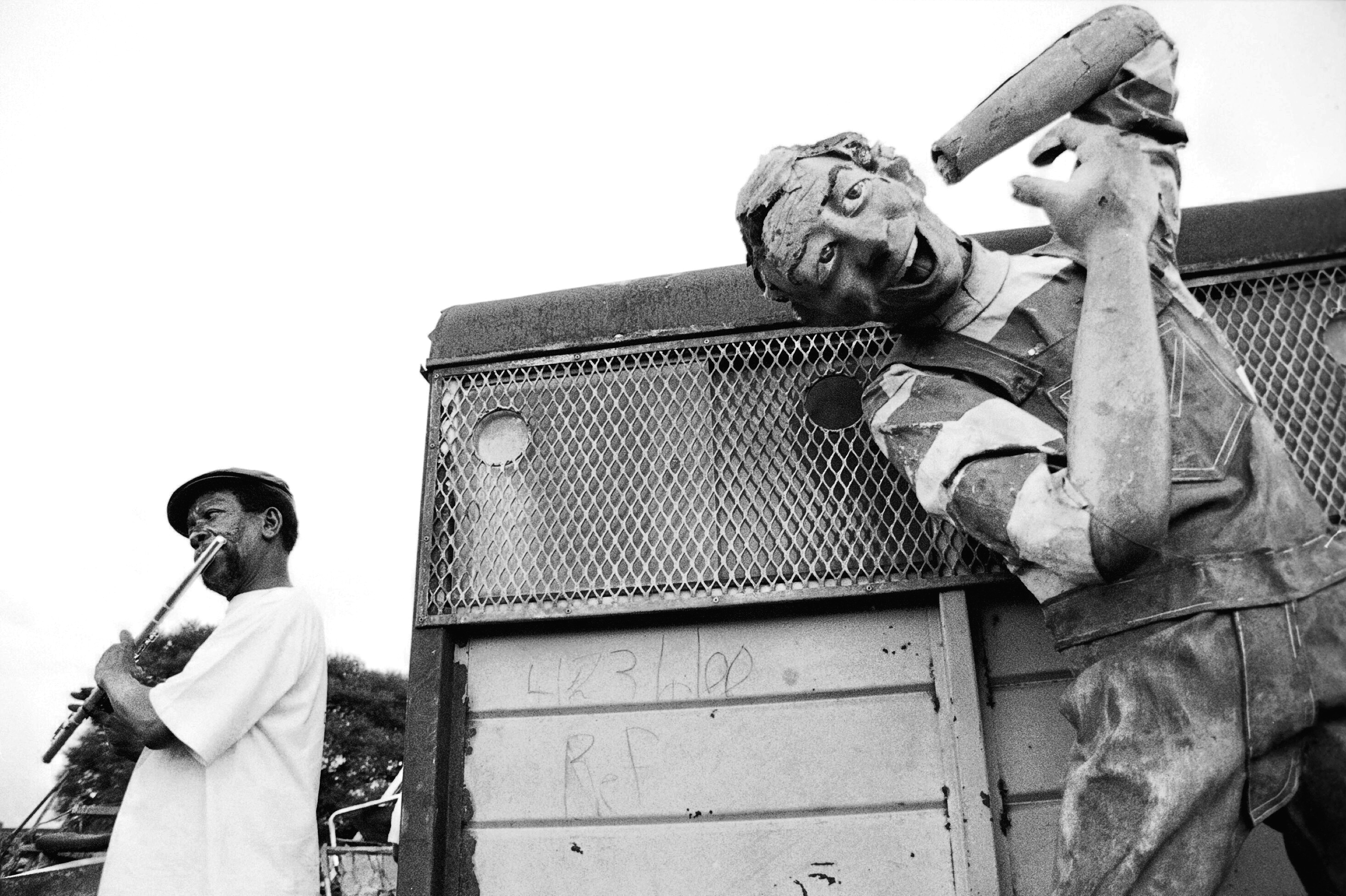 A representative from the Ministry of Sports, Arts and Culture promised to convey to his principals, Mahlangu’s dare to government to establish a bursary dedicated to the upskilling of saxophonist. Addressing the gathering on behalf of Minister Nathi Mthethwa, the official went down the memory lane of Rachabane’s biography, mentioning his collaborations with Hugh Masekela, Abdullah Ibrahim, Darius Brubeck; his participation in the Graceland tours of Paul Simon (which commenced in 1987 – and had the American paying a personal visitation to his family in Pimville on two separate occasions), as well as the anti-apartheid political-cultural platform of Medu Culture and Resistance Festival in 1982. Segueing on Rachabane’s other love – apart from music – his wife, Manini (who predeceased him on July 30), the official went on to quote the late poet, Keorapetse Kgositsile who wrote: "I wish I was a cartographer of dreams but what I end up with is this stubborn question: Should I love my heart more because every time I miss you that is where I find you."

Present too was the jazzman’s surviving sibling, Molebogeng Makunta, who fondly reminisced of how it was like growing up in Alexandra with a brother she described as a role model who at the age of 11 already displayed such precocious character as to bring home for the family’s upkeep, money he had earned from his pennywhistle playing outings.

Rachabane’s daughter, Queen – one of three, who include Octavia, a recording singer – lamented on how difficult it was for the family to again be assembled under the same circumstances not so long after they had bidden farewell to their mother, going on to describe how the family witnessed for the first time, her father cry after his wife’s passing. "Papa would never had survived without his soulmate," she added wistfully. 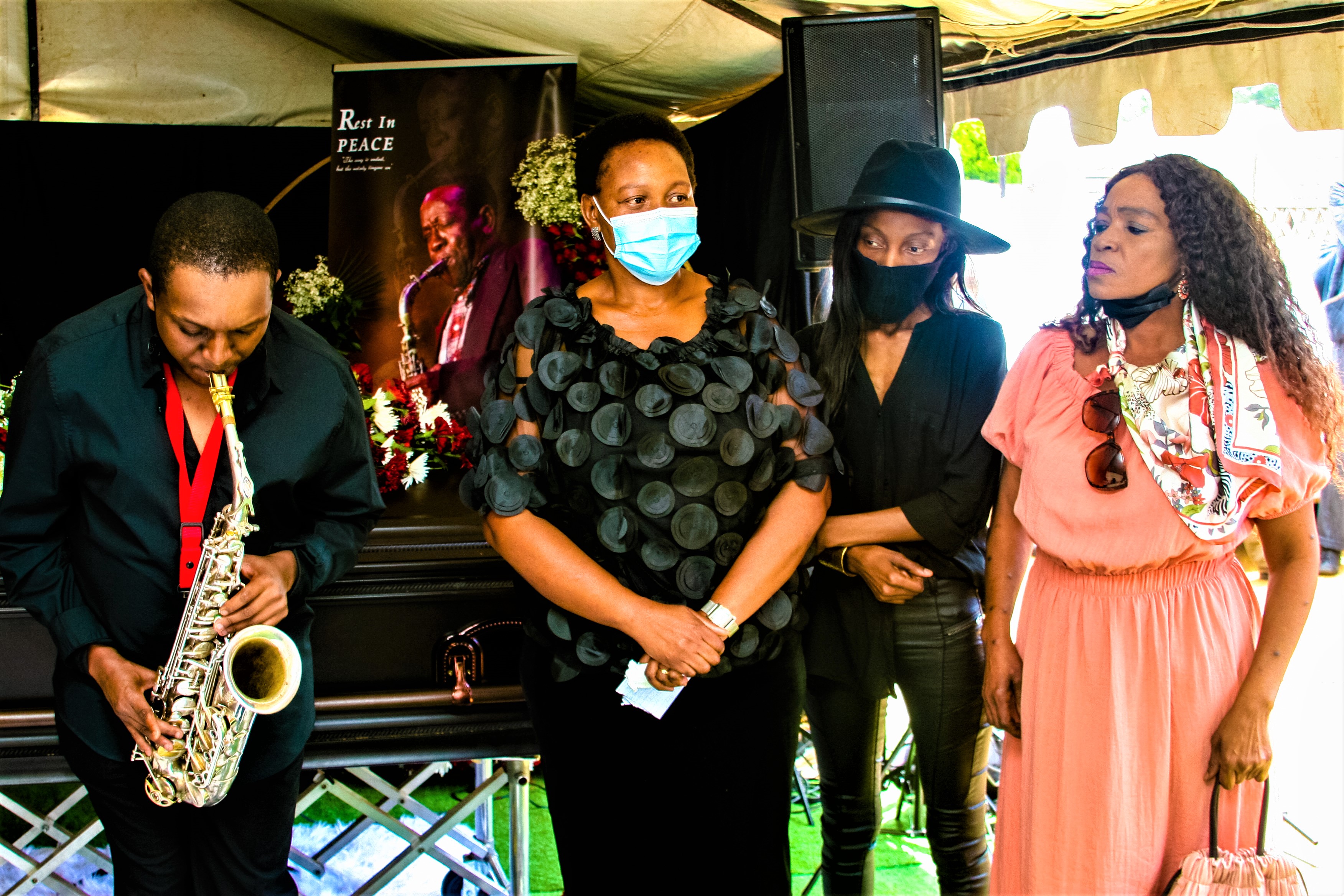 A niece, Tirhani Sono read out thoughtful notes on behalf of the grandchildren, describing indelible moments when his famous uncle used to visit her home in a Beetle and they had to ensure there was condensed milk in the house to accompany his cup of tea (a favourite beverage of his he once intimated to a journalist as, liking hot – not warm).

An item on the programme also entailed Rachabane’s grandson blowing a tributary storm titled, In a Sentimental Mood - a Sonny Rollins standard.

At the conclusion of the Pimville segment of the funeral programme, the cortege departed for Westpark Cemetery where the burial took place in the heroes’ section – adjacent to the gravesite of fellow musician, Pat Shange.

The son of a bus driver who was also a pianist who asked him how he hoped to have a wife, children and a home as a musician – he started out as one of the pennywhistle playing child stars of the early 1950s (who numbered the likes of Lemmy "Special" Mabaso) who, at the age of 7, along with mates, formed a band they named, Alexander Junior All Stars, which played on street corners.

Growing up in a neighbourhood whose residents included musicians such as Ntemi Piliso and Zacks Nkosi, Rachabane grew up starry-eyed, looking up to the much older players whom himself and mates revered enough to carry their instruments at shows they performed at. (The writer of this reportage – who happens to be a longtime Pimville neighbour of the Rachabanes, in addition to having photographed the musician on numerous occasions – once came across an evocative monochromatic image in the Sunday Times depicting a very young Barney holding a pennywhistle among his peers on a house’s front stoep, which might have been recorded around his formative period).

By his teens, Rachabane was being invited to play his pennywhistle alongside Piliso and Nkosi at events such as weddings. Now marking out notaries of the pursuit such as Kippie Moeketsi and American players he heard from vinyl’s – he eventually progressed from the pennywhistle to larger instruments such as the clarinet and the alto sax whilst becoming a familiar performer at prominent venues such as Selborne Hall and Dorkay House. Whilst in his teens, he featured in Early Mabuza’s Quarter, Tete Mbambisa’s bands and others such as Chris McGregor’s’ multi-racial band. His jazz education and evolution continued pending the period of his involvement with the ensemble, Roots,where he teamed up fellow reedmen, Duke Makasi, Dennis Mpale, Jabu Nkosi and a then young bass guitarist named Sipho Gumede.

Choosing to remain in South Africa whilst contemporaries went into exile, Rachabane survived the 70s and 80s when life under apartheid rendered it tough for musicians to eke out a living. Describing the epoch and the predicament of big band musicians to a journo, he offered: "Apartheid killed them all. They couldn’t do anything so they drank themselves to death."

The years 1985 and 1989 had him recording a duo of albums named, Blow Barney Blow and Barney’s Way, respectively.

A career opportunity presented itself with his participation in Paul Simon’s Graceland album of 1986 – a project which was to endure for two decades, entailing touring to international events. (A photograph in his Pimville home depicts him serenading a chaffed Simon whilst playing a pennywhistle in front of his house, pending the America’s second visit to his family in 2012).

Rachabane, who passed on not long after he had undergone cataract surgery, leaves behind his three daughters, Lavern, Queen and Octavia (a recording jazz vocalist in her own right) and grandchildren (including saxophonist grandson, Oscar). He lost his son and fellow musician, Leonard,
in 1999.