A debate rages on social media on Mswane’s 'dove of peace' costume. 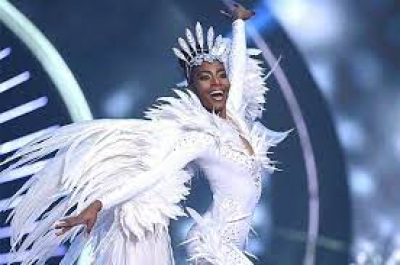 A debate has erupted on social media after Miss South Africa Lalela Mswane wore a dove of peace outfit at the Miss Universe pageant.

Mswane dazzled a dove costume to show the culture of South Africa and "its spirit of Ubuntu".

A nation that has shown that lasting peace can be achieved. She is honoured to bring this message of hope to the global stage," read the caption of a post by Miss South Africa on Twitter.

"Our beautiful Miss South Africa @lalela_mswane represents her nation, culture and its spirit of Ubuntu. A nation that has shown that lasting peace can be achieved. She is honoured to bring this message of hope to the global stage."

"Lalela is dressed in a white bodysuit with subtle feathers printed to serve as a base for the feathered arms covered in white pheasant feathers to transform Miss South Africa into a dove of peace."

It was accompanied by a video of Mswane strutting the costume at the Miss Universe pageant on Friday in Israel.

Oh bro i was actually watching so i will tell you. She is determined focused and outspoken. She has the best stage perfomance of all the girls. She is sttong willed and has her own brain and ideas. She's not a typical fluff girl that one. She's amazing. ??

Last night, Lalela also took to the stage for the preliminary competition which included swimwear and an evening gown round. The white gown was designed by Ezra Couture.

The national costume competition doesn’t form part of the overall scores of contestants but serves as an opportunity for them to honour their respective countries.

The annual beauty pageant has been mired in controversy.

Government has withdrawn support for the Miss South Africa Organisation after officials couldn’t convince organisers to pull out due to the Israeli government’s stance against Palestinians.

The winners of the 70th Miss Universe pageant will be announced on Sunday during a live show.

More than 70 countries are expected to compete at the 70th edition of Miss Universe in Eilat, Israel, on 12 December.Andrea Meza of Mexico will crown her successor at the end of the event, which sees Steve Harvey returning as host.

The 70th Miss Universe pageant will get another repeat airing on M-Net's Me (DStv 115) on Sunday 19 December at 20:00, making the broadcast available to more lower-tiered DStv subscribers.

More in this category: « #R10GoesALongWay launches 2.0 to ignite hope for students in 2022. Entrepreneur Vusi Thembekwayo denies assaulting his wife. »
back to top