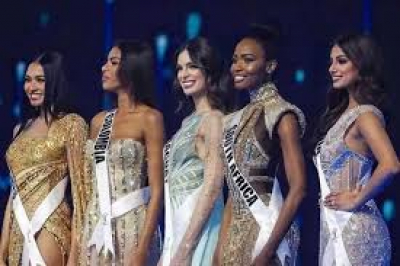 Miss South Africa, one of the many contestants pressured by her own government to boycott the controversial pageant to protest Israel's treatment of the Palestinians, was named second runner-up.

When the Bollywood actress Miss India was next announced as the winner, Sandhu fell into joyful tears before taking her first stage walk as Miss Universe.

Earlier in the show, Harvey had alluded to his Miss Universe 2015 fiasco in which he had announced the wrong winner. In 2015, Harvey named Miss Colombia Ariadna Gutierrez, who was really first runner-up, as the winner instead of Miss Philippines Pia Alonzo Wurtzbach, who won the competition.

With Sunday's competition down to the final two, Harvey referred to Miss Paraguay as "Miss Portugal" seconds before announcing the winner. He quickly corrected the mistake.

"They wrote Portugal on the damn sign, they're trying to play me again," Harvey said of the show's producers. "I'm not going for it this year."

Earlier in the competition, Harvey asked Sandu, who had just cracked the top 16 as Miss India, "I hear you do some pretty good animal impersonations. Let's hear your best one."

Sandhu responded with a cat's meow from the stage that became an instant internet meme, while Harvey received some criticism on Twitter for the question.

More in this category: « Entrepreneur Vusi Thembekwayo denies assaulting his wife. Inside MaMkhize’s lush snow-white Christmas. »
back to top