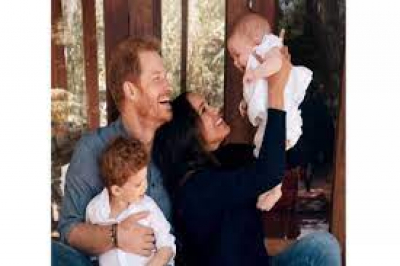 The Duke and Duchess of Sussex have released their family Christmas card featuring the first photo of their baby daughter Lilibet Diana Mountbatten-Windsor.

The message on the card reads: "Happy Holidays. This year, 2021, we welcomed our daughter, Lilibet, to the world. Archie made us a 'Mama' and a 'Papa', and Lili made us a family. "

The photographer of the family portrait, Alexi Lubomirski took to social media to share the original photograph.

Alexi has been the couple’s private photographer for many years and has taken pictures of Meghan and Harry as an engaged couple, and pictures of them as a married couple on their special wedding day.

"To be able to continue the story of this family whom I first photographed as an engaged couple, then on the day of their wedding, as a married couple and now seeing their love manifest into two beautiful children, has been a delightful honour," said Lubomirski in the caption of his post.

This day with the Duke and Duchess of Sussex was one such joyous experience and one that I feel extremely privileged to have been invited to capture," said the photographer.

The couple concluded their note with: "Wishing you a happy holiday season and a prosperous New Year, from our family to yours! As ever, Harry, Meghan, Archie & Lili."

Lilibet was born on 4 June 2021 at Santa Barbara Cottage Hospital, with the proud parents announcing her birth to the world two days later. She is named after her great-grandmother,the Queen, whose family nickname is Lilibet. She is currently eighth in the line of succession.

More in this category: « Media personality Angie 'Mam'Angie' Diale dies aged 55. Jub Jub’s mom unable to leave her home as she fears for her safety. »
back to top