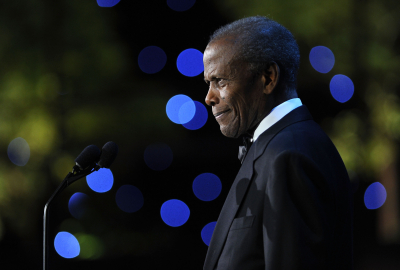 The Hollywood star was known for films including Guess Who’s Coming to Dinner, In the Heat of the Night and Lilies of the Field, for which he became the first Black and Bahamian man to win a Best Actor Oscar.

The news was announced by the Bahamian Minister of Foreign Affairs Fred Mitchell prompting tributes from the world of entertainment.

Bahamian-American star Poitier was automatically granted US citizenship after being unexpectedly born in Miami while his parents were visiting in February 1927.

He grew up in the Bahamas but moved to America when he was 15, and served in World War Two as a teen after lying about his age.

After leaving the army, he worked as a dishwasher until he landed a place at the American Negro Theatre School of Drama.

Poitier scored his first lead film role in 1955’s Blackboard Jungle and his first experience of awards recognition came with The Defiant Ones (1958), which saw him nominated for Best Actor alongside co-star Tony Curtis.

Six years later, he historically won the Best Actor Oscar for his performance in Lilies of the Field.

Denzel Washington  praised Poitier when he became the second Black man to win Best Actor for 2001 film Training Day, saying: "I’ll always be chasing you, Sidney. I’ll always be following in your footsteps. There’s nothing I would rather do, sir."

At the same ceremony, Poitier received an Honorary Academy Award for his contribution to American cinema. As of 2012, following the death of Ernest Borgnine, Poitier became the oldest living Best Actor winner in history.

In an interview published on Thursday (6 January), Washington told Variety he would have loved to have starred in a film with Poitier, who retired from acting in 2001.

"God bless him – he’s still here, but yeah, I missed that opportunity," the actor said.

In 1967, Poitier starred in three films that addressed the issue of race relations: To Sir, with Love, Guess Who’s Coming to Dinner and In the Heat of the Night, which was directed by Norman Jewison.

In the latter, he played Virgil Tibbs, a Black police detective from Philadelphia, who becomes involved in a murder investigation in a small town in Mississippi. It became so well known for Poitier’s line of dialogue, "They call me Mr Tibbs", that a sequel named after the quote (stylised They Call Me MISTER Tibbs!) arrived in 1970.

In the 1980s, he directed numerous films, but had the most success with the Richard Pryor and Gene Wilder comedy Stir Crazy (1980).

The actor also served as a diplomat. In 1997, he was named the ambassador of the Bahamas to Japan. He remained in the position until 2007.

Poitier married twice, the first time to Juanita Hardy from 1960 to 1965. After a nine-year affair with actor and singer Diahann Carol, Poitier married Canadian actor Joanna Shimkus in 1976. They stayed together for the remainder of his life.

With inputs from Independent.