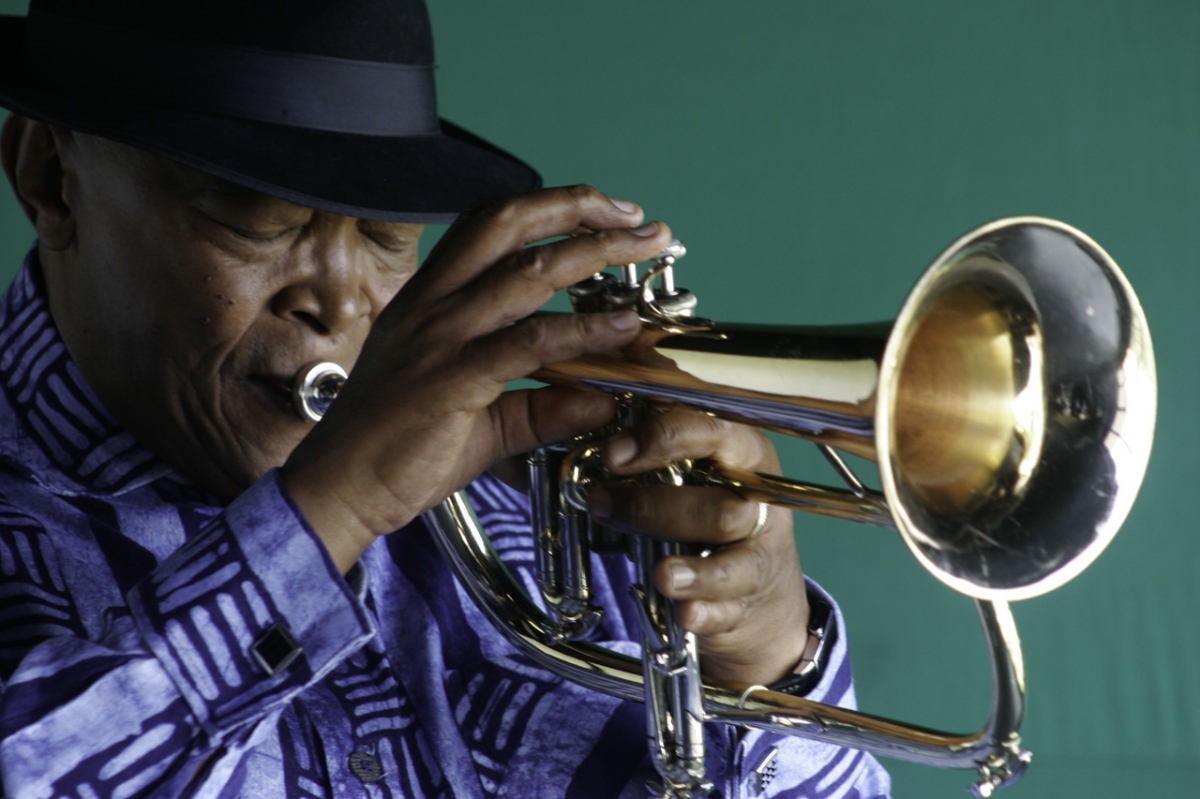 Hugh Masekela was born in the town of Witbank,in 1939. At the age of 14, the deeply respected advocator of equal rights in South Africa, Father Trevor Huddleston, provided Masekela with a trumpet and, soon after, the Huddleston Jazz Band was formed.

Masekela began to hone his, now signature, Afro-Jazz sound in the late 1950s during a period of intense creative collaboration, most notably performing in the 1959 musical King Kong, written by Todd Matshikiza, and, soon thereafter, as a member of the now legendary South African group, the Jazz Epistles (featuring the classic line up of Kippie Moeketsi, Abdullah Ibrahim and Jonas Gwangwa).

In 1960, at the age of 21 he left South Africa to begin what would be 30 years in exile from the land of his birth. On arrival in New York he enrolled at the Manhattan School of Music. This coincided with a golden era of jazz music and the young Masekela immersed himself in the New York jazz scene where nightly he watched greats like Miles Davis, John Coltrane, Thelonious Monk, Charlie Mingus and Max Roach.

His subsequent solo career has spanned 5 decades, during which time he has released over 40 albums (and been featured on countless more) and has worked with such diverse artists as Harry Belafonte, Dizzy Gillespie, The Byrds, Fela Kuti, Marvin Gaye, Herb Alpert, Paul Simon, Stevie Wonder and the late Miriam Makeba.

In 1990 Hugh returned home, following the unbanning of the ANC and the release of Nelson Mandela – an event anticipated in Hugh’s anti-apartheid anthem ‘Bring Home Nelson Mandela’ (1986) which had been a rallying cry around the world.

In 2004 Masekela published his compelling autobiography, Still Grazing: The Musical Journey of Hugh Masekela (co-authored with D. Michael Cheers), which Vanity Fair described thus: ‘…you’ll be in awe of the many lives packed into one.’

In June 2010 he opened the FIFA Soccer World Cup Kick-Off Concert to a global audience and performed at the event’s Opening Ceremony in Soweto’s Soccer City. Later that year he created the mesmerizing musical, Songs of Migration with director, James Ngcobo, which drew critical acclaim and played to packed houses.

That same year, He was honoured with the highest order in South Africa: The Order of Ikhamanga. 2011 saw Masekela receive a Lifetime Achievement award at the WOMEX World Music Expo in Copenhagen, the first of many. Numerous universities, including the University of York and the University of the Witwatersrand have awarded him honorary doctorates. The US Virgin Islands proclaimed ‘Hugh Masekela Day’ in March 2011, not long after Hugh joined U2 on stage during the Johannesburg leg of their 360 World Tour. U2 frontman Bono described meeting and playing with Hugh as one of the highlights of his career.

Bra Hugh toured Europe with Paul Simon on the Graceland 25th Anniversary Tour and opening his own studio and record label, House of Masekela at the age of 75. His final album, No Borders, picked up a SAMA for Best Adult Contemporary in 2017.

More in this category: « Raise your glass to fourth South African National Beer Day (#SANBeerDay) - 01 February 2020. Buckle up, it's time for Gold Reef City's Ride of Your Life! »
back to top