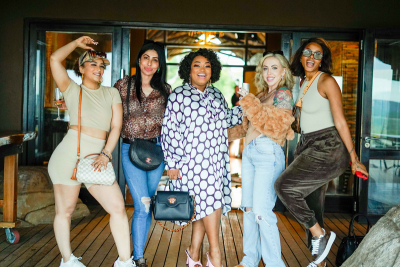 Season 1 of The Real Housewives of Durban was one of the 10 most-watched titles on Showmax in 2021 and Season 2 of launches tomorrow, Friday, 28 January 20.

Jojo Robinson is one of three new wives featured this season, alongside Londie London and Thobile MaKhumalo Mseleku. The wife of Durban businessman and former South African kickboxing champion Calven Robinson, Jojo is a tattoo fanatic, artist, and mother to her six-year-old son, Rocco.

We caught up with her to find out more:

Why did you decide to be a part of The Real Housewives of Durban?

I decided to join this season because I wanted to give a new perspective on the tattooed community. Often people have assumptions about people with tattoos and I wanted to flip that around and show everyone that you should never judge a book by its cover. I also always wanted to do something in TV and thought this would be a good way to kick-start that. I love doing things that are out of my comfort zone, and I think this was the perfect space for self-growth and to create new friendships. It's time to make the circle bigger, baby. And bring a little sugar and spice to an already amazing group of women.

When you told your husband that you were joining the show, what was his reaction?

My husband has been very supportive in everything I do. It took quite a long time for confirmation to come through: it was just sort of hanging in the balance and it was a situation of 'Am I gonna get it or not?'. The whole time he was supportive and he just said that if it was something that I wanted to do, he'd be there for me.

My family is supportive. I haven't really had anyone in my personal life who's been against the show. It's more the outsiders and people who aren't too close to me that had bad things to say.

It's very different from what I initially thought it was going to be. It's a lot of work: it involves a lot of late nights and early mornings. You'll go from one side of Durban to the next on the same day. I've found that it's a big commitment to be part of the show but it's also been lots of fun. I absolutely love all the women on the show. It's been a ride!

What took the most getting used to? Being in front of a camera or exposing your personal life on national TV?

I think the viewers are going to see that I battled the first episode. It was a combination of being nervous and because this is new. So my personality was still very quiet and sharp.

As the episodes have gone on, I've got more comfortable and my personality is evolving into who I am.

I battled at first to justify how much I should give. Like, how much should I show? How much should I tell? Can I be myself? Will people like me? I was very worried to be myself because I thought, 'Okay, maybe I'm going to be too much,' but then before episode 2 came along I decided to relax and allow myself to be me. That was the most challenging. I mean, it's easy to be you in the comfort of your own home but to be you in the comfort of your home with 50 people around you, filming, is difficult.

So what does Jojo bring to this new season?

I'm bringing the realness! I say it as it is.

The production team laugh at my scenes because what I say ends up coming out really funny. I say things without meaning it, but then it comes out funny. So I think I bring a bit of humour and realness.

I hope viewers can see the fun side of me. I'm sassy, very sassy, in a good way. I can have a fight with you and carry on, but the next day I will be over it and I'm not going to hold a grudge. I refuse to take sh*t, so if you give me sh*t I will dish it back to you. But if you apologise and it's done, we can be friends again and we move on.

I'm also bringing a bit of luxury in as well. I have a beautiful life and a beautiful home but I think I am very different from the average person in my situation. Most people associate housewives with being wealthy and snooty but I'm coming in as an average Jojo. I've got the money and lifestyle and everything that goes with it, but I'm very down to earth.

I'm also younger than most people that have this lifestyle. I mean, most people who come to my house think that it's my parents' house.

I don't know a lot of women who have the lifestyle I have and are heavily tattooed. People always assume people with tattoos have nothing. So I'm hoping to change people's perspectives of those who are different from them, that we aren't necessarily what you think we are. So I hope people can also just accept me for who I am and see that the tattoos don't define who I am.

Who would you say you've learnt a lot from and why?

I feel like I've learnt a little bit from each lady because I think each woman brings something different to the table.

For instance, before I came on to the show, I had watched Season 1 and I was actually very nervous to meet LaConco. I know she's a very pure woman and I thought maybe, me being so tattooed, she might not like me, and it was the total opposite. We've actually had such a bond and I just get on with her incredibly well. She's never judged me; she's so supportive and so loving.

Then Annie and her hard work - that woman just believes in hard work! I'm lucky I don't have to work while doing the show. So I can't understand how Annie is able to manage multiple businesses and still do the show. It's inspirational that she's able to do that.

And Sorisha and her big heart - she's got the biggest heart in the whole world. And Londie with her singing - she's such a beautiful family person and she's very talented. And Nonku, I mean we have a similar past and I just admire her strength and how she dealt with it. She's such a strong, independent woman.

Who was your favourite on Season 1 and why?

Annie was my favourite! For some reason, I saw myself in Annie. While watching Season 1, I could just see that she was like a ball of energy waiting to explode. She likes adventure and she's funny. I really liked Annie and since I've now met her, I like her even more. I don't even feel that the camera fully captures her positive energy and zest for life. Even behind the scenes, she's the one that pulls everyone together.

Is there any lady that you didn't gel with?

(Laughs) Not that I didn't gel with.

Nonku and I have had a bit of a run in but we've resolved that issue already. Well, I feel like it's resolved. Whether or not it's resolved in her head, I don't know.

She's a strong personality. Sometimes it's her way or the highway but I understand that because of where she comes from; she's just very strong and independent. But we've got past the issue, I hope.

And we've connected on the fact that we have a similar past.

Have there been any cringe-worthy or unexpected moments from the show so far?

(Laughs) I can't give away some of the secrets. There have been some cringe moments; some 'Oh my word, she didn't say that' moments. There was actually something that Londie said that will come out in the show. It's a bit cringe, a bit funny, a bit shocking. And I mean, you know Nonku and the drama. She has been consistent in bringing the drama! I think viewers can expect a lot of drama and lots of fun. It's definitely going to be a good season.

What will the viewers take away from watching this season?

I hope that they're going to see really great friendships. We are all so different - literally the seven of us couldn't be more different - but we gel well. I would hope that they take a sense of sisterhood and that the differences between us are so minimal, in the bigger scheme of the world.

And I hope that they can see that having money doesn't make you better than anyone. We are just the same as anyone else.

The Real Housewives of Durban ladies are known to be stylish. Did you have a specific stylist that helped you with your look?

I have a specific style that I've always put together myself. I don't really trust anyone else with styling me because I know me the best. Also, seeing that I'm completely covered with tattoos, it's very difficult to do certain outfits. So I've been my own stylist but I did have a make-up artist.

Now that you're in this show, would you consider a full-time career in TV?

Obviously this is my first time really being involved in something like this, so I didn't know what to expect. It's been so strange that while we were shooting, I asked myself, 'What have I got myself into?' But now we're on a week break and I'm actually missing it - I miss the excitement and everything that comes with it.

Let me just say if I can balance my family life with that, I think I would. It would also depend on what the show would be and on the situation.

Any advice for housewives who would be interested in joining this franchise in the future?

Well, if you have a job, you need to put the job on hold because trying to work, do the show and have a family life is a lot altogether. If you can just focus on the show and family, the work situation for a few months will be busy. You need to be ready for the long nights and early mornings. You need a lot of patience if you're going to do this show.

Catch Jojo on the new season of The Real Housewives of Durban from tomorrow. Friday, 28 January 2022, with new episodes following every Friday.

More in this category: « Shai described as a great art educator and encyclopedia of South African arts. TNS and Kasango bless us with their new single 'Sikelela featuring Bukeka'. »
back to top