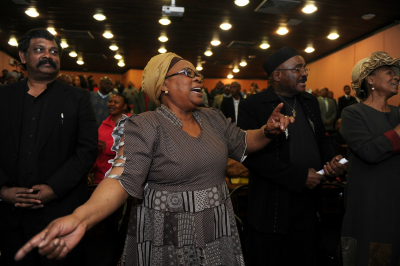 The show was inspired from the uniquely South African 'colourful Sunday cooking' trope.

Honey TV announced on Monday that cooking reality TV show 7 Colours, proclaiming that it will be Africa’s biggest cooking show, will be coming to South African screens soon.

The show is inspired by South African favourite meals called seven colours which are usually made on Sundays or special occasions. The two celebrity hosts, Dube and Ndiki will go into the heart of South African homes to see how people really make their Sunday kos.

In every episode, the families, friends and loved ones will show off their cooking skills and be rated on the dish they cook as well as the plating execution of their favourite local and home dishes.

Dube, who has appeared on Soul City, Cry My Beloved Country and a few of Leon Schuster movies is excited about this new show.

"I love going into people’s homes, interacting with them and seeing what their plates look like," she said in a statement, adding her favourite moments were being on set with Ndiki

His hosting skills have gained him much notoriety in shows such as Uyang’thanda Na? and You Promised to Marry Me. Ndiki’s sense of humour, punchy one-liners and infectious laugh are likely to bring many smiles to viewers’ faces.

"Not only am I working with Lillian Dube, [but] I also experienced meeting the different contestants and how we are all excited when we are shooting," he said.

Honey TV head of content Zinzi Velelo said 7 Colours will showcase the best of SA culture and the show is "laid back" and will bring some joy on our screens.

More in this category: « SA's post-pandemic love triangle film, Glasshouse "could be a modern classic". Family of media personality and actress Kuli Roberts confirm her death. »
back to top