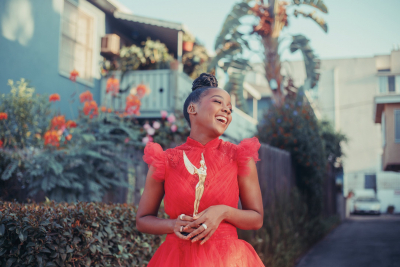 The "Underground Railroad" star Thuso Mbedu walked away with the award for best female performance for a new scripted series at the 37th Film Independent Spirit Awards on Sunday.

The Spirit Awards - usually held a day before the Oscars - is the premier awards event for the independent film and television community.

"A big thank you to @filmindependent for allowing me to be part of such an important and brilliant group of people. I'm humbled. Thank you for this recognition," wrote Mbedu on Instagram.

She also thanked Colson Whitehead, who wrote the book the series is based on and director Barry Jenkins.

"Thank you to everyone involved in creating this timeless work of art. Have a lot more people to thank - and I will - but right now, I just need to let this sink in," she ended the post.

Last year Mbedu tied for Outstanding Performance in a New Series at the Gotham Awards and won the award for TV Breakout Star at the Hollywood Critic's Association TV Awards.

She recently returned to South Africa to film the upcoming feature film The Woman King alongside Viola Davis and John Boyega.