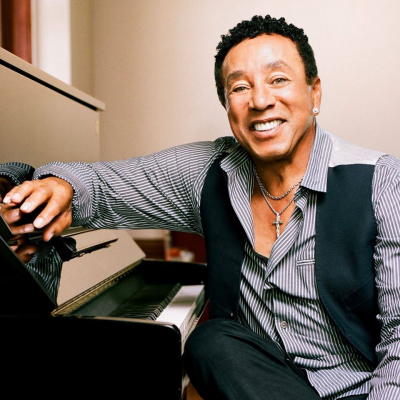 Smokey Robinson’s story goes hand in hand with the tale of soul music’s most influential record company: Motown. Both were born and bred in Detroit, the "Motor City". Robinson was the company’s main songwriter and producer, and a star, from its beginning in 1959. When Motown was sold to MCA in 1990, Smokey Robinson retired as the Vice President.

There were many times in Smokey’s career when his singing had to take a back seat to his role as a record company executive. But Smokey has never retired from music.

William Robinson Jr. was born today in Detroit in 1940. You would think that the nickname "Smokey" came from his smooth voice or his exotic looks, but no. Little three year old William was a huge fan of Western movies, so his uncle gave him a cowboy name: Smokey Joe. And that’s how he introduced himself to new people.

Living in the same neighbourhood as the Franklin family,He knew Aretha from the age of eight. Young Smokey did well at school, but there was all that inspirational music around: in church, on the radio and in the gatherings of friends and family.  Music became his true passion. In High School he formed a doo-wop group ‘The Five Chimes’ together with his class mates and childhood friends. After a few name and line up changes, this group became the famed ’Miracles’.

After he retired from Motown in 1990, Smokey has had time for numerous careers. He has his own winery and skincare line. He has recorded duets, gospel and children’s music.

More in this category: « UJ's #CloseToHeART Programme Announced. The Emerald Resort and Casino is ready to roar with action. »
back to top