R&B Singer Keith Martin found dead aged 55 in his condo in the Philippines. 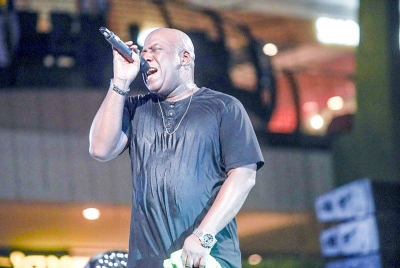 Because Of You singer Keith Martin was found dead in his condo at the age of 55 on Friday morning in Quezon City, part of Metro Manila in the Philippines.

Although the cause of death is currently unknown, the police allegedly said he may have died a week before his body was discovered.

The building's property manager is said to have called the authorities after neighbors noticed a stench coming from what turned out to be Martin's apartment.

When the police arrived on the scene, they found Martin lifeless in his bed, according to witnesses cited by The Sun.

On March 12, Martin performed at the Filipino singer Daryl Ong's wedding in Antipolo, according to Quezon City's GMA Network.

Filipina singer and actress Sheree Bautista, who was friends with Martin and worked with him, claimed to PEP.ph after his death that he had been 'brokenhearted' after a supposed breakup with a girlfriend in the Philippines late last year.

Bautista brought up the conjecture that Martin had been dead for a week but pointed out that the autopsy results were still to come.

Martin was best known for his romantic single Because Of You, amid an R&B catalogue that included such songs as Never Find Someone Like You.

He shot to fame in his native America in the 1990s and his popularity spread to Asia, eventually culminating in his keeping a home in the Philippines.

During his time in the Philippines he worked extensively as a record producer and collaborated with such local stars as Jinky Vidal and Luke Mirajes.

He worked on more than one album with the singing sensation Kyla, who has become known as the 'Queen Of R&B' in the Philippines.

Born in Washington, DC in 1966, Martin was raised in a musical family that inspired his own enthusiasm for the art form.

'You know, Moms, Pops, cousins, aunts, uncles, grandparents, everybody did music so it was always around,' he told the web show Music Dive.

By the 1980s he had begun working in the local R&B scene in DC, hobnobbing with such names as Johnny Gill who became a star in New Edition.

Although he spent part of his early career in a group called Masquerade, Martin eventually took his chances as a solo artist.

He released his debut solo album It's Long Overdue in 1995 and its lead single Never Find Someone Like You increased his profile.

The song's popularity was massively amplified when it was included on the Bad Boys soundtrack, which went platinum.

However the most famous number from the album, and of Martin's entire career, turned out to be Because Of You, which also made him a star in the Philippines.

Because Of You was in fact written 'for a choir' and wound up being recorded for his album by mistake, Martin confessed on the Philippine TV show Letters And Music.

'The original version of the song that's on the record, that wasn't supposed to be there,' he divulged. 'You know, the engineer turned on the mic on the piano and what I was doing while I was taping, you know, for a video.'

As a result the number made its way to 'the list' of tracks for the album 'so I just ran with it,' he said. 'I mean, you know, that's how God work sometime.'

Because Of You became a beloved classic in parts of Southeast Asia, and he eventually moved to the Philippines to pursue opportunities as a record producer.

Local celebrities and friends from the music industry confirmed the news of his passing on social media, like Kyla, Daryl Ong, Kris Lawrence, and actress Sheree Vidal Bautista, who each paid tribute to the hit maker behind the 2004 hit "Because of You."Keith’s close friend Sheree said he was found dead in his condo unit in Libis, Quezon City

More in this category: « Imbewu moves to an early time slot to make way for new 'adult' show. Will Smith apologizes to Academy for Chris Rock slap in tearful speech. »
back to top