Will Smith apologizes to Academy for Chris Rock slap in tearful speech. 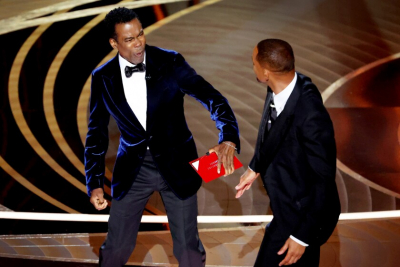 By Rebecca Rubin and Jordan Moreua.

Will Smith apologized to the Academy and his fellow best actor nominees in his winning acceptance speech, shortly after he went onstage and slapped Chris Rock for making a joke about Jada Pinkett Smith. He did not address Rock in his speech.

"I want to apologize to the Academy. I want to apologize to all my fellow nominees. This is a beautiful moment and I’m not crying for winning an award. It’s not about winning an award for me. It’s about being able to shine a light on all of the people. Tim and Trevor and Zack and Saniyya and Demi and Aunjanue and the entire cast and crew of King Richard', Venus and Serena, the entire Williams family. Art imitates life. I look like the crazy father, just like they said about Richard Williams, "Smith said in his tearful acceptance speech.

Rock had earlier made a joke about Pinkett Smith being in "G.I. Jane" because of her bald head. Pinkett Smith announced last year she shaved her head after struggling with alopecia. After smacking Rock in the face, Smith yelled at him, "Keep my wife's name out of your fucking mouth!" The Oscar audience, and viewers on social media, were stunned by Smith’s slap, which seemed like a comedic skit at first. The incident took place during the presentation of best documentary feature, which was a few categories before best actor. Smith addressed the slap immediately upon taking the stage to accept the award.

"Richard Williams was a fierce defender of his family. In this time in my life, in this moment, I am overwhelmed by what God is calling on me to do and be in this world. Making this film, I got to protect Aunjanue Ellis, who is one of the strongest, most delicate people I’ve ever met. I got to protect Saniyya and Demi, the two actresses that played Venus and Serena," he said, as he began to tear up. “I’m being called on in my life to love people and to protect people and to be a river to my people. I know to do what we do, you got to be able to take abuse. You got to be able to have people talk crazy about you. In this business you got to be able to have people disrespecting you. And you got to smile and you got to pretend like that’s okay."

After the incident with Rock, Smith’s publicist Meredith O. Sullivan, Oscar producer Will Packer and best actor nominee Denzel Washington came by to talk to Smith during the commercial breaks. In his speech, Smith revealed what Washington said to him.

"Thank you, Dee. Denzel said a few minutes ago, 'At your highest moment, be careful, that’s when the Devil comes for you," Smith said.

Despite the shocking moment that had just taken place, Smith kept the end of his speech light and joked about being invited back to the Oscars.

"To my mother — a lot of this moment is really complicated for me — but to my mother, she didn’t want to come out. She had her knitting friends; she has a knitting crew that she’s in Philly watching with. Being able to love and care for my mother and my family, my wife — I’m taking up too much time. Thank you for this honor. Thank you for this moment. And thank you on behalf of Richard and Oracene [Price] and the entire Williams family. Thank you. I hope the Academy invites me back," Smith said before exiting the stage.

Smith won best actor for "King Richard," a feel-good sports drama in which he plays the father of tennis icons Venus and Serena Williams. He has previously been nominated twice for best actor: in 2002 for the boxing biopic "Ali" and in 2006 for "The Pursuit of Happyness."

Smith became an early frontrunner for the best actor Oscar during awards season, staying in the conversation through wins at the Golden Globes, BAFTAs, Critics Choice and Screen Actors Guild awards. In a stacked Oscar race, Smith beat out Javier Bardem ("Being the Ricardos"), Benedict Cumberbatch ("The Power of the Dog"), Andrew Garfield ("Tick, Tick … Boom!") and Denzel Washington ("The Tragedy of Macbeth") to take the top prize. Coincidentally, Smith lost the Oscar in 2002 to Washington, who won for "Training Day."

Directed by Reinaldo Marcus Green, "King Richard" landed six nominations in total, including best picture, supporting actress for Ellis as Venus and Serena’s mother and original screenplay. In the crowd-pleasing biographical drama, Smith delivers the kind of performance — anchored by the true story of a dedicated-to-a-fault dad to rising sports stars — that Oscar voters love to recognize.

But Smith previously told the New York Times that he once worried "The Pursuit of Happyness" would be the apex of his Hollywood career, despite having dozens of film roles since then.

"I thought I had reached my artistic pinnacle," he said. "So for the world to respond to this film in this way energizes me as an artist. I'm just wildly inspired to create and even to to be able to tell stories like this."

At this year’s SAG Awards, in one of Smith's many recent and moving awards season speeches, the 53-year-old actor called Richard Williams "a dreamer like no one has ever known."

"He has a power of belief that borders on insanity and sometimes tips over the border, which is absolutely necessary to take something from impossible to possible," Smith said.

More in this category: « R&B Singer Keith Martin found dead aged 55 in his condo in the Philippines. Disney+ announces launch date and pricing for South Africa. »
back to top