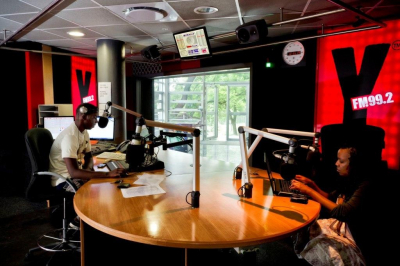 Y continues to open up the industry this programming year. Newly unearthed and seasoned broadcasters will share space on the airwaves and other Y platforms.

Actor, TV presenter and now radio broadcaster Caddy (full name Teboho Tsotetsi) hosts Fresh by Caddy on Saturdays from 2pm to 6pm. Known for his role on local production, Legacy and 2021 GQ's best-dressed winner, he says that joining Y has long been an aspiration of his. "I've always wanted to join the freshest radio station in South Africa and look forward to covering what's trending in street culture, music and fashion."

Former Tuks FM DJ, Dimpho Mokgotho, will now host The D Spot on Saturdays from 10am to 2pm and drives the musical experience of Sunday Feels from 10am to 2pm on South Africa's largest commercial youth radio station. The perfectly curated music playlists on Sunday Feels, is one of the stations flagship entities and is a differentiating offering that cannot be missed.

Mncedisi Sindane, the winner of Y's #BeTheNext competition, now joins the official Y line-up on weekdays from 3am to 5am.

Haseena Cassim, MD of YFM, says that the line-up continues to stay true to the essence of Y, which is a brand that connects the world to young South Africans and young South Africans to opportunity: "We have created opportunities for new talent to shine and ensured that the Y line-up is not only geared to deliver the best content for the consumer but to take the consumer on a memorable experience.

"I know that the new afternoon drive time show, launching on 3 May, is set to deliver a scintillating connection between the listener, brand and host. Y evolves alongside its listeners and this year will illustrate Y's presence within the market, in spaces outside of its traditional and digital platforms."

The philosophy of creating opportunity is extended into the sought-after weekday mix DJ slot YTKO, which defined the 6pm hour in the market. DJs will now compete to become the resident for Wednesdays every month.

"YTKO Knockout Wednesday will open up the industry for many young DJs. Mentors Just Mo and Zan D are exceptional at their craft and will offer direction and advice to hopeful DJs," continues Haseena Cassim.

These mix DJ masters (Just Mo and Zan D) have built brands both on and off the Y platform and will take on In The Ring – Saturdays from 8pm to 10pm. This platform is the weekly battleground, and each mentor will select a finalist to take into the 'ring' for the first Wednesday of each month.

Fif_Laaa takes over the 6pm to 10pm Sunday evening slot with Sundaze.

Lula Odiba, who hosts The Night Cap with Lula Odiba (Mondays to Thursdays from 7pm) now adds Fridays at 7pm to her roster, with a brand new mix show called Level Up.

As demanded by our audience, Y Mornings with DJ Ankletap and Kandis Kardash, The A List with Supta and Tshepi, The Shakedown with Nia and Mthaux remain as is.

The station's new drive time show will launch on Tuesday 3 May (Monday 2 May is a public holiday) and the host will be announced in April.

More in this category: « Disney+ announces launch date and pricing for South Africa. Will Smith resigns from the Oscars Academy over slap. »
back to top