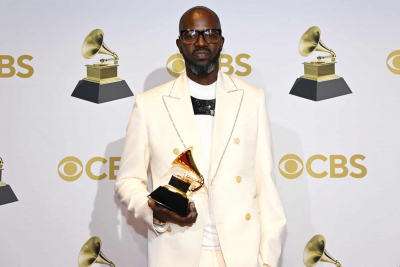 This is the first time a South African producer has won or been nominated in this category.

DJ Black Coffee shared this special moment with his first-born son, both taking to the stage in crisp white suits to accept the award.

He was up against Illenium, Major Lazer, Marshmello, Sylvan Esso and Ten City for the prestigious award.

Addressing the guests and viewers at home, Black Coffee said he wanted to thank God for the gift of music, and being able to share it with the world and heal some souls.

The award-winning artist also thanked his album collaborators, including Pharrell and David Guetta, who Black Coffee says "believed in working with a smaller artist like myself and trusting me and trusting my ear."

SA-born comedian Trevor Noah was a host at the awards and Johannesburg flautist, producer and composer Wouter Kellerman was nominated for a third Grammy, this time in the New Age Album category for his collaboration project Pangaea, but lost out to Stewart Copeland and Ricky Kej in the category.

Friends and fans have flooded social media with congratulatory messages for Black Coffee after his historic win.

President Cyril Ramaphosa has sent his well wishes to Maphumulo, also known as Black Coffee, for winning an award at the Grammy Awards held at Las Vegas in the United States of America last night.

"Congratulations to Black Coffee for being awarded the Best Dance/Electronic Music award for his album 'Subconsciously' at last night's Grammys. Thank you for flying the flag and inspiring a new generation of talent to take over the world, "Ramaphosa said.

The DJ joins a select group of South Africans who have scooped a Grammy including legendary group Ladysmith Black Mambazo and the Soweto Gospel Choir with nominations only for other legendary artists Johnny Clegg and Savuka, Miriam Makeba and Hugh Masekela.

The house music muso is now one of the most decorated DJs on the African continent and the first to have won both a Grammy and a BET Award.

Other key winners at the 2022 Grammy Awards:

Jazzman and bandleader Jon Batiste led the night with five awards, including Album of the Year.

Retro act Silk Sonic – the group project of Bruno Mars and Anderson Paak – won four awards, including Record and Song of the Year.

More in this category: « Boardroom Dancing by Nolitha Fakude. Tickets sales open for second Standard Bank Joburg Polo in the park. »
back to top