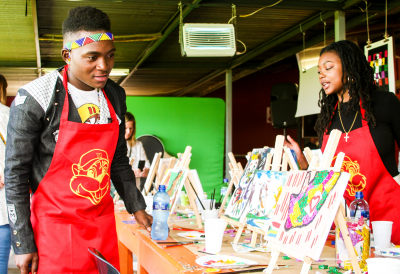 One of South Africa’s instantly recognizable household names, Chappies, invited the media corps for a fun-filled launch of its new cola flavour bubble gum at Chaf Pozi, under the iconic Soweto Towers,on a Tuesday lunchtime.

The brand which has been a part of childhood memories throughout any citizen’s lifetime, yet again posed its Did You Know facts, by hinting that consumers could now blow bubbles of the limited edition Chappies Cola – which would in the process create excitement for the next generation of Chappies chewers, and who would in turn, learn how much fun chewing bubble gum really is.

With fun-filled activities in the offing, and having been welcomed with biltong and ice-chilled King Size bottles of Coca-Cola upon arrival, proceedings commenced with the viewing of a video featuring creative Mpumalanga-based artist, Josias Mpyana, aka The Chappies Artist, and depicting his usage of recycled Chappies wrappers in his art. Chappies SA had commissioned Mpyana to create an art piece which expressed his love for the brand and the joy he got from blowing bubbles of Chappies Cola.

The resultant work, Blow Bubbles of Chappies Cola - a self-portrait showing him blowing a bubble with Chappies Cola bubble gum constructed of mixed medium of Acrylic and Chappies Wrappers on Paper – was on display at the restaurant for guests to behold.

A brief introduction of the artists immediately followed, after which guests were then treated to a lunch of the venue’s speciality of grilled meats, pap and chakalaka – ahead of getting their hands dirty at creating artworks of their own revolving around matters Chappies.

Ahead of tackling easel, canvas, brush palette and paint posers, attendees were also requested to dig into their inner child by having to blow the biggest bubble in front of an instant photo kiosk – with the one forming the biggest being rewarded with a R1000 voucher.

The exciting segment of the whole occasion proved to unfold around a long table occupied by blank canvasses on easels, as well as palettes containing paints of various colours and brushes. Wrappers lay strewn all over the table for innovative creatives to utilize on their artworks.

Under Mpyana’s watchful eye, as well as the lenses of a photographer and videographers, novices and those with a hang for the task at hand (with most donning red aprons), toiled, some in silent concentration and others with audible frustration until the programme director for the day signalled brushes down – before adjudication time.

Vivacious budding actress, Mihlali Adams, who had revealed amongst those at a table she was sitting around that she had never won a competition – in addition to intimating that she was due to hit the small screen later this month in the SABC 2’s Next of Next Week - trumped competitors by claiming a R1500 voucher. Her artwork depicted a young lady wearing an Afro hairstyle. Her concept was apt and on point, given her involvement in Hairline, a Pop Art show bound for the Maboneng district in mid-March.

University of the Witwatersrand student, Sethu Mabandla proved to be the new flavour’s biggest bubble blower by collecting the R1000 voucher on offer. Upon collecting their rewards, the two young lasses posed for photographs whilst flanking The Chappies Artist around his artwork.

Spotting a colourful headwear constructed of beads woven in Ndebele patterns, Mpyane soaked in and savoured his moment in the spotlight, albeit in a business-like manner and it was apparent that Chappies SA couldn’t had settled on a more deserving aspirant to market its product. This, since the Mpumalanga lad’s journey resonates with those of any members of communities scattered across the country who has gone through the routine of taking a detour to the shop at their street’s corner to purchase their pockets fill of Chappies with small change – if only for the purpose of nudging their vocabularies through the latest, Did You Know facts, they might not previously had known.

A provided media release described Mpyana’s style as being contemporary and abstract and which accentuates a brand he came to know as a boy who, upon discovering the Did You Know facts found inside the wrappers, began collecting them until he integrated the recycled bits into his art. “Working with Josias again illustrates how impactful Chappies is within South African communities. As a brand, we feel proud that Josias has made Chappies part of his legacy and hope that many more will be inspired by his passion, creativity and unique style,” Chappies SA’s Category Brand Manager for Gum, Trushann Thomas is quoted in the release.

The new Chappies Cola flavour is a culmination of South Africa’s number one bubble gum brand along with the number one leading soft drink flavour. The combination of the two will excite both young and old audiences who have enjoyed chewing and blowing bubbles with Chappies over the years.

More in this category: « Cape Town International Jazz Festival removes Sjava from the lineup. Killer line-up for the inaugural UJ Weekend of Stand-up. »
back to top