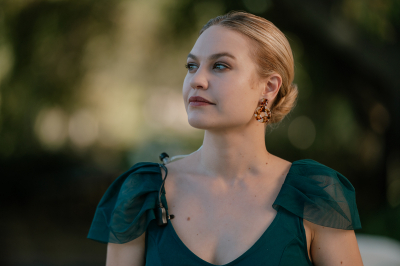 Season 2 of Troukoors (Wedding Fever) is now available to binge first on Showmax, with Season 1 premiering on kykNET on Sunday, 15 May 2022 at 8pm.

Love, weddings, and staying true to yourself. As Troukoors returns with a second season, it picks up right where it left us last year - and unlike some series, we don't have to wait years to find out what happens to our favourite characters.

Jessica - our bubbly wedding planner - is happily in love with Liam, the chef, but still walking a delicate tightrope at work after her earlier shenanigans. Luca is struggling with her long-distance relationship with writer Stefan while working on his game, and Abi is still unattached, taking a little break from love and sex. Meanwhile, their surrogate parents, Karel and Nathan, are planning their wedding, with many a hiccup along the way.

With the short break between seasons, it's easy enough to dive right back into the extremely binge-able series, offering much of the same fare of melodrama and chaos as the first season. With the introduction of a few new characters to stir the pot, the story is injected with just the right amount of vigour to keep it fresh while retaining what made it so entertaining the first time around. However, the stories don't become stale or overplayed - there are enough twists to keep you hooked, and our lovely three leading ladies take some big leaps in character development - although not always on the side of good.

Jessica takes a jaunt on the dark side with some questionable work ethic, while Abi hurts a few people when she doesn't communicate her feelings. Luca is, well, still Luca and stumbles across many an obstacle in her first serious relationship. Their messiness is what makes them so relatable, and despite their mistakes, you'll still want to root for them to do better. The acting is a little over the top, but it fits with the style of the show and is the main reason we all want to tune in. Actors Ilse-Lee van Niekerk, Blyde Smit and Bianca Flanders continue to show off their infectious chemistry as a strong female-centric dynamic, honestly coming off as if they could be the best of friends in real life. Despite being a rom-com, I appreciate the show's effort in building the non-romantic relationships as vital parts of the plot rather than just supporting fodder.

As for the men in this series, we see a return of the main squeezes - grumpy yet loveable chef Liam and the hot nerdy Stefan (albeit on webcam). Jessica's ex and coworker David still flaunts suavely in the background, while Theo from the farm wedding venue gets an expanded role as a competing love interest. They also do some soul-searching in the series as new temptations are introduced - a smooth-talking math professor played by Marlon Minnaar out to seduce the fasting Abi, and a geeky game writer Luca is forced to work with, played by David Viviers. Both are welcome additions to the cast, but I loved Vivier's sweet but silly take on his role without just copying Stefan's nerdy persona. Out of everyone, I was most impressed with Liam's progression, as Christiaan Schoombie expertly tugged the heartstrings in many scenes and was the most responsible for any crying that might have taken place on my couch.

As for our favourite gay uncles - Karel and Nathan - let's just say a secret 18th birthday party causes a few stomach-hurting laughs, solidifying their role as the real heart of the series.

Troukoors season two offers most of the same as the first season, but you don't necessarily want it any other way. It's the best of soapies and rom-coms smashed into one, highly engaging and will continue to ignite any dormant romantic synapses. But beyond the romance, you'll also stay tuned for the sisterly bonds forged alongside life's messy road to self-discovery.