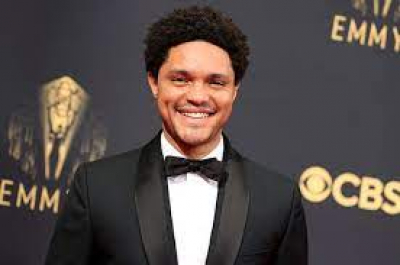 Comedian Trevor Noah has paid tribute to his grandmother, Frances "Gogo" Noah, who was laid to rest on Thursday.

Recently "The Daily Show" host bid farewell to his gogo (grandmother), who died a few days ago. She was 95-years-old.

Noah took to social media to pay her a fitting tribute after "crying all week".

In true comedian style, Noah posted a cute video of his adorable gogo along with a fun but lengthy caption that hit hard.

"How can I smile for a photo when I don’t have teeth?" ?❤️ This morning our family laid to rest the oldest member of our clan Frances Noah, or as most of us referred to her, Gogo."

This morning our family laid to rest the oldest member of our clan Frances Noah, or as most of us referred to her, Gogo. pic.twitter.com/t7FUpdYI24

He reminisced about spending time with her in Soweto, where every moment with her "felt like a magical journey".

"My grandmother was born in 1927, and even though she was 95 years old, she still had the best memory of us all. Every moment spent with her felt like a magical journey through time where she would recount all of the family’s greatest joys, losses, achievements and milestones.

"Her house in Soweto wasn't just a home. It was a refuge, a place where other women would come when they had no other place to go, a place where members of the community would gather to pray together every single week, a place where everyone was guaranteed to feel the love emanating from her mighty chest.

"She passed away peacefully in her sleep and even blessed us with one final Mother's Day which she enjoyed to the fullest. Hamba Kahle Gogo. ❤️

Many Daily Show viewers likely knew Gogo best from Noah's more than 10-minute segment, "Trevor Chats with His Grandma about apartheid and tours her home, 'MTV Cribs'-Style," in which she detailed life living under apartheid — the government-imposed racial segregation that took place in South Africa between the 1940s until the early 1990s — and spoke to Noah's childhood.

More in this category: « Minnie Dlamini breaks her silence on cheating rumours. Tributes pour in for kykNET presenter Aleit Swanepoel. »
back to top