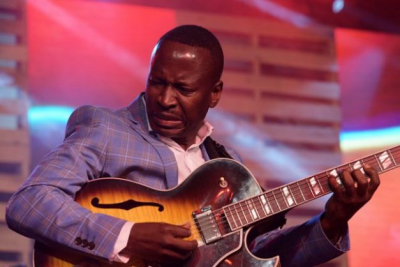 The South African State Theatre announced the Dashiki Dialogues with Percy Mabandu - a series of conversations and performances that celebrate virtuosity and luxury craftsmanship. The series brings renowned arts journalist and writer, Mabandu into wide ranging exploratory dialogues with leading creative men and women in art, jazz and beyond. The probing and meditative conversations are underscored by a solo performance by the featured artist showcasing their unparalleled capacity as instrumentalist and virtuoso craftsman.

The inaugural Dashiki Dialogue will feature the incomparable guitarist and composer, Selaelo Selota on 27 May 2022, 19:00 at The SA State Theatre's iconic Malombo Theatre.

Along with participating in an intelligent, insightful and humanising interview by Mabandu, Salelo Selota will present an imaginative solo performance of some of his memorable classics. Infectious ballads like Mamodiegi, Lolita, and evergreen anthems like Thrrr...phaaa! And others will be performed in a fresh prodigious panache.

Selota is a virtuoso guitarist, songwriter and producer. He emerged onto the musical scene as one of the defining voices of the post-1994 jazz moment with the dawn of South Africa’s democratic epoch. Selota's strength as a musician is drawn from being uniquely rooted in both the traditional and modern cultures of the greater Limpopo River basin.

In a career that spans over two decades, Selota has released seven studio records. He has produced and collaborated with musicians as great and varied as Judith Sephuma, Sello Galane, Umanji and many more. Selota is incomparable as a songwriter and even more remarkable as an instrumentalist.

Mabandu is a leading writer and journalist who works at the intersection of art, jazz and political economy. He is the author of Yakhal'inkomo - Portrait of a Jazz Classic, a book about the classic 1968 record by Winston Mankunku Ngozi. In Dashiki Dialogues, Mabandu dives into exploratory dialogues with virtuoso craftsmen and women in art, music, and beyond.

Tickets are selling for R200 at Webtickets, available at the SAST, Pick n Pay, and online https://bit.ly/BookDashikiDialogues.

More in this category: « Ryan Kruger’s Fried Barry to debut on Showmax. Isipaji Sika Simphiwe Dana LIVE at the State Theatre. »
back to top