Get ready for season one of Family Feud South Africa. 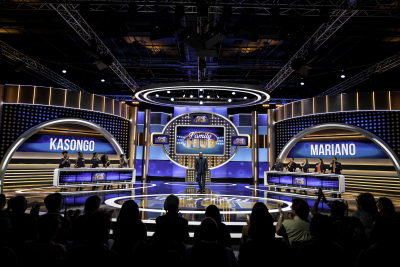 South African families are preparing to take each other on as the widely popular international television game show FAMILY FEUD makes its local South African debut on Sunday 5th April at 6pm on e.tv.

Hosted by award-winning entertainer, businessman and philanthropist STEVE HARVEY, who has been hosting the American version of Family Feud with enormous success since 2010, the debut of the 26-episode season is a dream come true for Mr Harvey.

“Bringing Family Feud to Africa has long been a dream of mine,” Mr Harvey said. “I believe Family Feud will become a household name for local South African families. This is just the beginning. I expect this show to lead to multiple media and business projects in and throughout the continent of Africa.”

Against the backdrop of a game show, FAMILY FEUD is really a family comedy with funny-man STEVE HARVEY embarking on a journey to learn about South Africa and its people, while two families compete to name the most popular responses to survey questions related to the country. The family that gains the most points walks away with the prize money.

The answers to the survey are locked into the gameboard and even if the contestants give a really good answer, if the answer is not on the board, it doesn’t count. Each correctly guessed answer is worth a certain number of points, which increase during the rounds. If a team fails to answer a question, they get a strike. After three strikes the opposing family gets a chance to ‘steal’ the points on the board. After five rounds, the family with the least points walk away with their winnings, while the other family goes on to play ‘Fast Money’ in a bid to win the jackpot in addition to money won during the game.

You can expect fun and laughter all the way as fellow families win serious cash. And no-one walks away empty-handed… To show that even ‘feuding’ families can come together, headline sponsor KFC will give away a Finger Lickin’ Good bucket of R10 000 in KFC vouchers every week to the losing family.

“KFC has always been a family brand - a brand that brings families together. Our iconic bucket has for generations been the conduit for so many families coming together to share a meal. Our partnership with FAMILY FEUD is a perfect fit for us as a brand because we both celebrate families… all types of families. Families may fight, families may challenge each other but at the end of the day, family is family and for us at KFC, families are always welcome,” said KFC Marketing Director Suhayl Limbada.

We have had the pleasure of airing the American version of FAMILY FEUD on e.tv, and the response to it was phenomenal. This year gives us the golden opportunity to provide the show that we know resonates with our audience, an authentically South African twist. We believe that FAMILY FEUD SA will do well,” said e.tv Managing Director Marlon Davids.

“We look forward to the people that make up the very fibre of our society reliving memorable moments and seeing themselves on their screens interacting with the one and only Steve Harvey. Viewers should also anticipate celebrity-driven episodes that include talent from two of our local flagship productions, Scandal! and Rhythm City,” concluded Davids.

Award-winning Executive Producers of Rapid Blue Duncan Irvine and Kee-Leen Irvine could not contain their excitement when talking about the local version of FAMILY FEUD.

Kee-Leen says she was most blown away by the pocket rocket that is Steve Harvey, who is a formidable combination of non-stop comedy, jaw-dropping work ethic and consummate professionalism. Kee-Leen loves that Mr Harvey embarked on a cultural journey that left him frequently amused, sometimes bemused, but always enriched.

Duncan is well known as a trailblazer in the industry, responsible for bringing most of the world’s top formats to South African screens such as SA’s Got Talent, Project Runway, X-Factor, Bachelor SA and Shark Tank, amongst many others.

It is Duncan and Rapid Blue’s reputation locally and internationally that made this partnership possible. Duncan said he is most excited by Mr Harvey’s passion for Africa and the relationship in Steve Harvey International partnering with Rapid Blue to create a broad slate of memorable entertainment. FAMILY FEUD SA is just the beginning.

The South African season will air every Sunday at 6pm on e.tv from 5th April until 27th September, with a repeat on eExtra on Friday nights.

More in this category: « Film producer Harvey Weinstein sentenced to 23 years in prison. The Timeless Taste of Amstel Enjoyed Everywhere. »
back to top