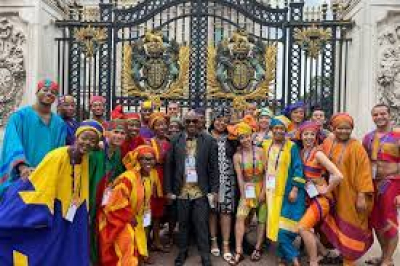 It was announced in a statement on Saturday that Lebo M will lead the Lion King's London cast in Buckingham Palace as Queen Elizabeth II and the nation celebrates her 70th-year reign.

"Lebo M will be the first and only black south African composer in all history to be serenading the Queen of England’s 25th Jubilee at the Buckingham Palace," the statement read.

"We are proud and honoured to be part of this historical event celebrating the HRH Queen Elizabeth's platinum jubilee with the crème de la crème of the world in the music industry.

"My performance will include predominantly black cast members of the Lion king Broadway London which again speaks to what I always say to the youth seeking guidance, that in order for one to be an international success, one needs to be authentic to oneself and that will project your craft accordingly and that is what the world is looking for authenticity," Lebo M said.

The concert is the highlight of the third day of public events to mark the 96-year-old monarch's record-breaking Platinum Jubilee with 22,000 people set to attend in person outside Buckingham Palace.

Saturday's concert will be broadcast live by the BBC on radio, television and online from 9pm South African Time.

More in this category: « Veteran Broadcaster John Berks passes away aged 80. Kelly Khumalo at the peak of her career in S3 of her reality series. »
back to top